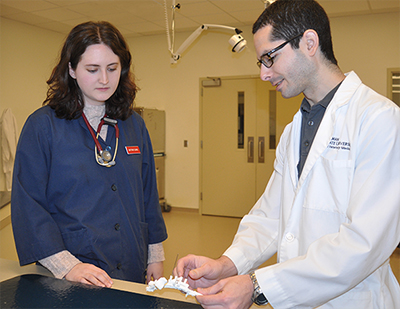 Prepared on All Levels

Preparation is key for any endeavor. In order to be prepared to the fullest, Dr. Jaron Naiman, assistant professor of veterinary clinical sciences, has turned to a new technology.

Naiman is an orthopedic and soft tissue surgeon in the Hixson-Lied Small Animal Hospital. About a year ago, he started experimenting with a small 3-D printer to create anatomical models of his patients or rather the parts of his patients he would be operating on.

Using a patient’s CT scan, Naiman creates a one-to-one scale model of the animal’s body part. By adapting various software programs, including some intended for animation and industrial design to fit his needs, Naiman has created multiple models for both practical and educational uses.

“The hard part is actually cleaning up the CT scan to create the model,” he said. “The printing can be done in a day or two.”

Because of that time period, Naiman prepares models for surgeries that aren’t time sensitive. Once completed he will use the models to achieve three different objectives.

“The primary benefit is that it allows us to look at a model to see what we will be doing in the surgical procedure,” he said. “It saves time in surgery because we can plan the procedure on the computer and practice on the 3D printed model as many times as needed until we get the optimal outcome.”

But there are other benefits as well. Naiman uses the models to better inform pet owners of what the surgery will actually consist of.

“We use the models to show the owner what the surgery will entail,” he said. “The owners have been extremely receptive to this and understand better what we are going to do with their pet.

“It’s easier for owners to understand the patient specific anatomy using a 3D model than with 2D images from a CT or radiograph.”

Finally, Naiman also uses the model to instruct fourth-year veterinary students who are on surgical rotations.

“This is so much better than an image in a book or on a website,” he said. “They can actually hold the model in their hands and get a better understanding of the anatomy of the process.”

Most of Naiman’s patients he has created models for have been dogs, but he has utilized the technology to plan a corrective osteotomy (bone straightening procedure) on a ram in a collaborative effort with the ISU Large Animal Surgery service. The ram went on to win a blue ribbon at the Iowa State Fair after undergoing surgery. He also created a skull model for a pig that had been hit by a truck to help the surgery team plan and prepare bone plates specific to the patient’s anatomy prior to surgery.