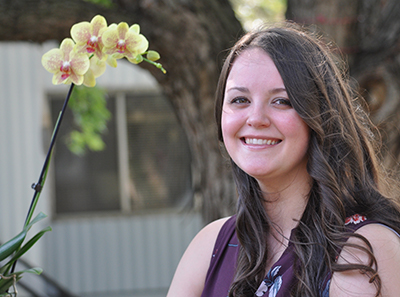 The words roll off Jennifer Buehler’s tongue with ease. Words such as Phalaenopsis, Oncidium, Cattleya, and Cymbidium. Words most of us would have to look up online to see what they mean, let alone how to spell or even pronounce them.

But for an orchid enthusiast like Buehler, there are no better words in the English language.

“I just love orchid flowers,” the third-year veterinary medicine student from Charles City, Iowa, says. “I love that I can look at beautiful blooms for most of the year from one plant.”

Orchids are unlike most flowering plants in that the thousands of orchid species bloom at least six months out of the year. Buehler’s fascination with orchids actually began in middle school, and many of her original plants are blooming to this day.

“I first learned about orchids while helping with my brother’s wedding because his future mother-in-law was an avid grower,” she said. “I had spent my entire childhood in rural Iowa, and I had never seen an orchid in person and believed they were overly expensive and difficult plants to grow.”

Still, her curiosity got the best of her, and she started researching orchids. Eventually, she convinced her mother to get her a beginner’s kit, and the rest is history.

“My parents actually had two orchids delivered overnight for me,” Buehler said. “Today, I have about 12 Phalaenopsis orchids that are still blooming beautifully at home.”

While certain species of orchids require more expertise, common orchids such as the Phalaenopsis are easier to grow. Buehler says the trick to growing them is understanding where they grow naturally and how to best recreate that environment in your home.

Bright and indirect lighting is necessary for growth. Properly potting the plant in well-draining media is important. Keeping their roots moist and aerated is essential. Buehler says growers have to keep an orchid’s roots “just moist enough but not too dry at the same time.”

“This is the hardest part about growing orchids that many new beginners struggle with, but this can be easily mastered,” she said.

Buehler has developed her own complicated watering technique that involves, among other things, collecting rainwater. She stores the rainwater in the basement of her family’s Charles City house. Some of her orchids only need watering every 10-14 days; others only every two to three weeks.

Still, it takes her about an hour to water all of her orchids. That is a chore that she has delegated to her father since starting veterinary school at Iowa State.

“My Dad is taking care of them while I’m gone,” she said. “My hobby has actually become a family hobby now, but once I’m out of my drafty mobile home here in Ames, I’ll be sure to take over their care. Come to think of it, if my Dad knows I’m coming home for the weekend, he’ll wait for me to water them”.

“I wanted a challenge, and it has become incredibly rewarding to grow them. Now I just really love orchids.”