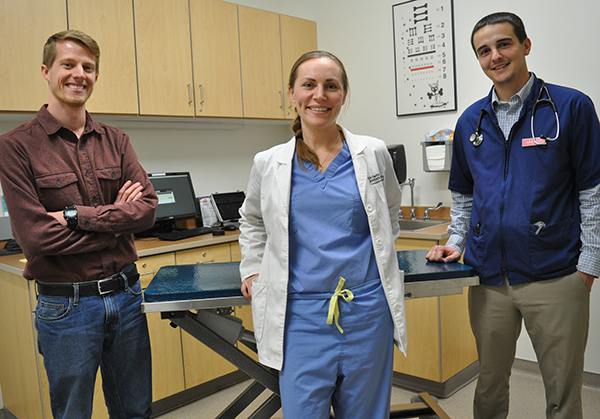 When Winnie’s owners went to bed one night, everything was normal.

But in the middle of the night the German Shorthaired Pointer puppy started to have neurological issues and the owners – Stephanie Hall and Arrow Megginson – took Winnie to their local veterinarian.

There the clinical exam was concerning. Winnie had seemingly gone blind overnight and the referring veterinarian recommended a trip from her Sioux Falls, South Dakota, home to the Hixson-Lied Small Animal Hospital in Ames.

There Winnie came under the crew of the ophthalmology team at Iowa State University.

“When Winnie first came in we could tell something was really wrong,” said Drew Noel, a fourth-year student. “She was walking into things.”

The owners couldn’t figure out how this could have happened, but upon further investigation, Noel and fellow fourth-year student Logan Eicher discovered that Winnie may have gotten into a horse dewormer.

“That’s when the light bulbs went off. That’s what we thought could ha

The pair conferred with Dr. Morgan Bertram, the intern on duty that day  on the ophthalmology service, and Bertram confirmed the diagnosis with Dr. Braidee Foote, an ophthalmology resident.

Winnie was suffering from Ivermectin toxicosis.

“Winnie received a very toxic dose,” Foote said. “This is a safe drug when given in small doses, but she may have gotten into 50 times the amount she should have received.”

Foote said if Winnie’s owners hadn’t sought immediate care, her condition could have worsened. Seizures were a distinct possibility and death may have occurred. Foote and Bertram prescribed a treatment of intravenous lipid therapy which was administered almost immediately.

The team continued to observe Winnie and after just three treatments, the dog had recovered to the point of being discharged the following morning, having regained functional vision with only minor deficits noted.

“Winnie had an excellent recovery,” Bertram said. “She responded great to her treatment.”

Since her arrival back in Sioux Falls, Winnie has continued to improve.

“She has returned to her prior spunky little self,” Hall reports, “having experience no ill effects or lingering symptoms.

“I was very impressed by the efforts of Drs. Foote and Bertram, as well as Drew and Logan. All provided comforting consistency, which put my mind at ease. There is no doubt in our minds that due entirely to the professionalism, training, knowledge, skill and expertise of this team, our little baby girl is alive and healthy today.”

For Noel and Eicher, this was a unique case. Not only did they treat Ivermectin toxicosis for the first time, it was a rare instance where they could experience the case from beginning to end in just one night.

“We were able to get a diagnosis, administer the treatment and see a resolution in less than 24 hours,” Noel said. “This rapid recovery isn’t something we experience much in our clinical rotations.”