Working on More Than Research

Vivek Lawana came to the College of Veterinary Medicine for the research opportunities.

When he leaves after graduating with a PhD in toxicology next June, he will have accomplished that goal and so much more.

“I was a big city person when I first came to Ames,” Lawana said. “I grew up in a major metropolitan area in India before working on my master’s degree at Long Island University in Brooklyn, New York.

“I basically didn’t know anyone outside of my research group at Iowa State.”

The best way to get to know people was to get involved. Lawana dove right in, volunteering to serve on the university’s Committee on Lectures and joining the Indian Students’ Association and the Toxicology Graduate Student Organization, both of which he would eventually lead as president.

But Lawana’s biggest involvement came when he was elected a senator of the Graduate and Professional Student Senate (GPSS). This elected group is the recognized body of graduate students on campus.

“Once I got involved with these groups I began to meet people,” he said. “Now there is hardly a day goes by I don’t meet someone new.”

And there’s hardly a day goes by when Lawana isn’t actively involved with something outside of his PhD studies and research group. He’s currently in his second year as GPSS president.

That role has afforded him the opportunity to serve on any number of university committees and meet with university and state officials advocating for graduate and professional students.

“At first I was very nervous to serve as president of a group representing 5,000 students at Iowa State,” he said. “But I enjoyed my first year so much I decided to stand for another term.”

Actually Lawana was considering not seeking a second term when then-Iowa State President Steven Leath announced his resignation. Lawana knew the GPSS president would be a part of the search committee for Leath’s successor and he wanted to be a part of the process.

“I really wanted to be a part of that committee and give all Iowa State graduate and professional students a voice,” he said. “And I was the only one on the committee that could give an international voice to the proceedings.”

Lawana admits his other non-academic duties take a lot of time. He estimates he spends at least 10 hours a week working with GSPS and other responsibilities. However, when he was serving on the presidential search committee, the time commitment was much higher.

“Some days are easier than others,” he said. “I believe I manage my time well and anyway, I think of my involvement with these groups as more of a hobby than actual work.”

He has mixed work with hobby on more than one occasion. He is a co-founder and was elected two times to serve as chair of the Graduate and Professional Students’ Research Conference on campus. These efforts earned him the “Above and Beyond Award” from the Division of Student Affairs for his commitment for excellence in academics, leadership and service.

He also has worked diligently to be published and he was the runner-up in the recent “3 Minute Thesis” (3MT) competition sponsored by the Graduate College. He has also won several other awards in national scientific meetings for his poster presentations.

“I will miss the university community,” he said. “I’ve met so many great people in Ames and in Iowa.

“I believe I will be sadder to leave Ames than I was when I left India.” 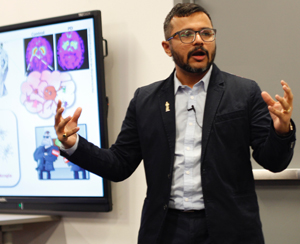 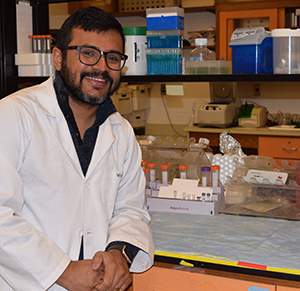