Iowa State University (ISU) became involved in several of the early cases in late July of 2015 that initially involved exhibition swine and in one instance, a commercial finishing site in South Dakota.  In each of those cases, the state and federal officials were contacted, samples were pulled and tested for the four foreign animal vesicular diseases as well as Senecavirus A at FADDL.  In all cases, the samples tested negative for all of the foreign animal vesicular diseases, but positive for Senecavirus A by PCR from swabs of ruptured vesicles, vesicular fluid and/or oral fluids.

In August, the pathologists from ISU began to screen cases of high pre-weaning mortality in neonatal pigs (less than 7 days of age) with diarrhea based on the Epidemic Transient Neonatal Losses (ETNL) that was described by Linhares et al that had occurred in Brazil in 2014.  Upon the initiation of testing, they discovered multiple cases where SVA was positive by PCR in serum, feces and various tissues, but no distinct histological lesions were associated with the neonatal deaths.  The neonatal mortality, was however, fairly short in duration (7-10 days in most cases) which minimized the overall impact to the breeding herds.

In an effort to quantify the incidence of new cases as well as determine the farm type and location, ISU began to publish a weekly report of diagnostic case submissions that tested positive for Senecavirus A via PCR.  Each week, the total number of diagnostic case submission that have at least one positive sample for Senecavirus A on PCR, gets included in the weekly total.  It would be important to note that each positive case would be independent of site, so it is possible that the same site could have submitted cases in the same week or different weeks and that they could be counted more than once. That case information is then broken out into the “farm type” and also by state of origin, both of which would have needed to be filled in on the submission form.  The “farm type” was broken out into sow farms (breeding farms with suckling piglets), growing pig (nursery, finishing or wean-finish) or unknown/other (feed, trailers, environmental sampling, etc).  All of the exhibition swine would have been classified as growing pigs.

Figure 1 shows the distribution of SVA positive cases on a map of the United States.  As a reminder, these would be only SVA positive cases for submissions to ISU VDL and would not reflect diagnostic samples sent to other labs.  As you can see, most of the cases are located in the upper Midwest, which is a reflection of where most of the pigs are located in the United States.

Figure 2 shows the weekly cases of Senecavirus A – PCR positive cases.  We were averaging 5-10 cases per week in the months of August, September and October, but have seen a drop in cases to just a few cases each week in November and no new cases the last couple of weeks of 2015.  We appear to end 2015 with about 109 total cases of Senecavirus A with the cases fairly evenly split between sow farms and growing pigs.

Senecavirus A is not a new pathogen, but certainly something has changed as we are beginning to see many more clinical cases than what has been seen historically.  It is important to remember when vesicular disease is suspected (e.g. lameness, snout and/or coronary bands lesions), the farm veterinarian and State/Federal officials should be contacted immediately (before any further pig movements). State and Federal officials will determine the next course of actions.  Because of the similarities to disease that are foreign animal vesicular diseases, we need to be diligent to test these cases and make sure they are associated with Senecavirus A and not one of these other vesicular diseases. 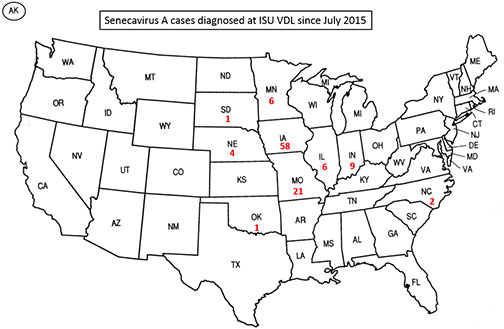 Figure 1. Summary of SVA positive cases from ISU VDL for each state. 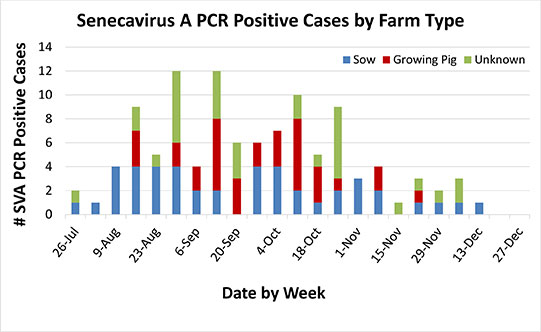