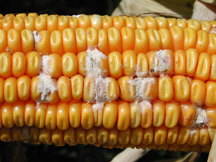 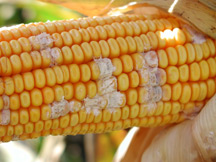 Since there are many kinds of mycotoxins, which differ from each other, they produce many different kinds of diseases, called mycotoxicoses. They may cause diseases of the liver, gastrointestinal tract, respiratory system, immune system, reproductive system or kidneys. Mycotoxicoses are not contagious.

It is best to collect a sample during movement of the feed, like when augering it from the storage bin into a grain truck. Collect small amounts over the entire time the feed is being moved, so that at least 5 pounds, and as much as 10 pounds, have been collected, and mix the collected sample thoroughly. From this large sample randomly select 1 pound in a zip lock bag to submit to the laboratory. Probe sampling may be used. Collect probe samples from as many areas of the feed as practical into a composite sample to select the 1 pound sample from.

There are legal requirements in regard to mixing or blending mycotoxin contaminated feeds. The Food and Drug Administration (FDA) updated its flooded food guidance on September 17, 2018. Grains are considered food crops and by rule, cannot be used for human or animal food if adulterated.However, for any adulterant there is provision for the holder to ask the FDA to approve a reconditioning plan. In Iowa, the contact point for the FDA is the Iowa Department of Agriculture and Land Stewardship, Feed and Fertilizer Bureau.