END_OF_DOCUMENT_TOKEN_TO_BE_REPLACED

A new member of the PCVAD complex?

Circoviruses are small viruses with a circular, single-stranded DNA genome of approximately 2,000 bases, belonging to the family Circoviridae, genus Circovirus. Working in conjunction with Kansas State University, researchers at ISU VDL recently reported the detection of a new species of circovirus.

A retrospective study that included 74 cases spanning samples from 2010 to 2016 with lesions representative of PDNS and PMWS without immunohistochemical detection of PCV2. All samples were PCV3 positive by PCR and large subset were confirmed by immunofluorescence. The fact that most of the lesions observed overlapped with different PCV2 clinical presentations make the real clinical interpretation of PCV3 challenging.

Subsequently PCV3 is being detected in most of the swine producing countries worldwide.

At ISU, we offer a duplex PCV2/PCV3 PCR that allows our clients to detect both viruses in the same samples. The current diagnostic tests are capable of detecting the virus in tissues.

The clinical implications of the PCR findings in these samples remains unclear. 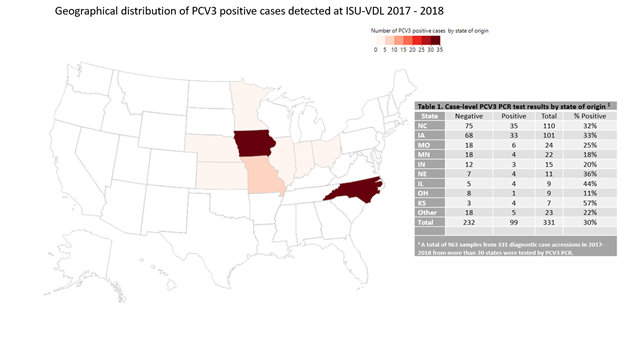