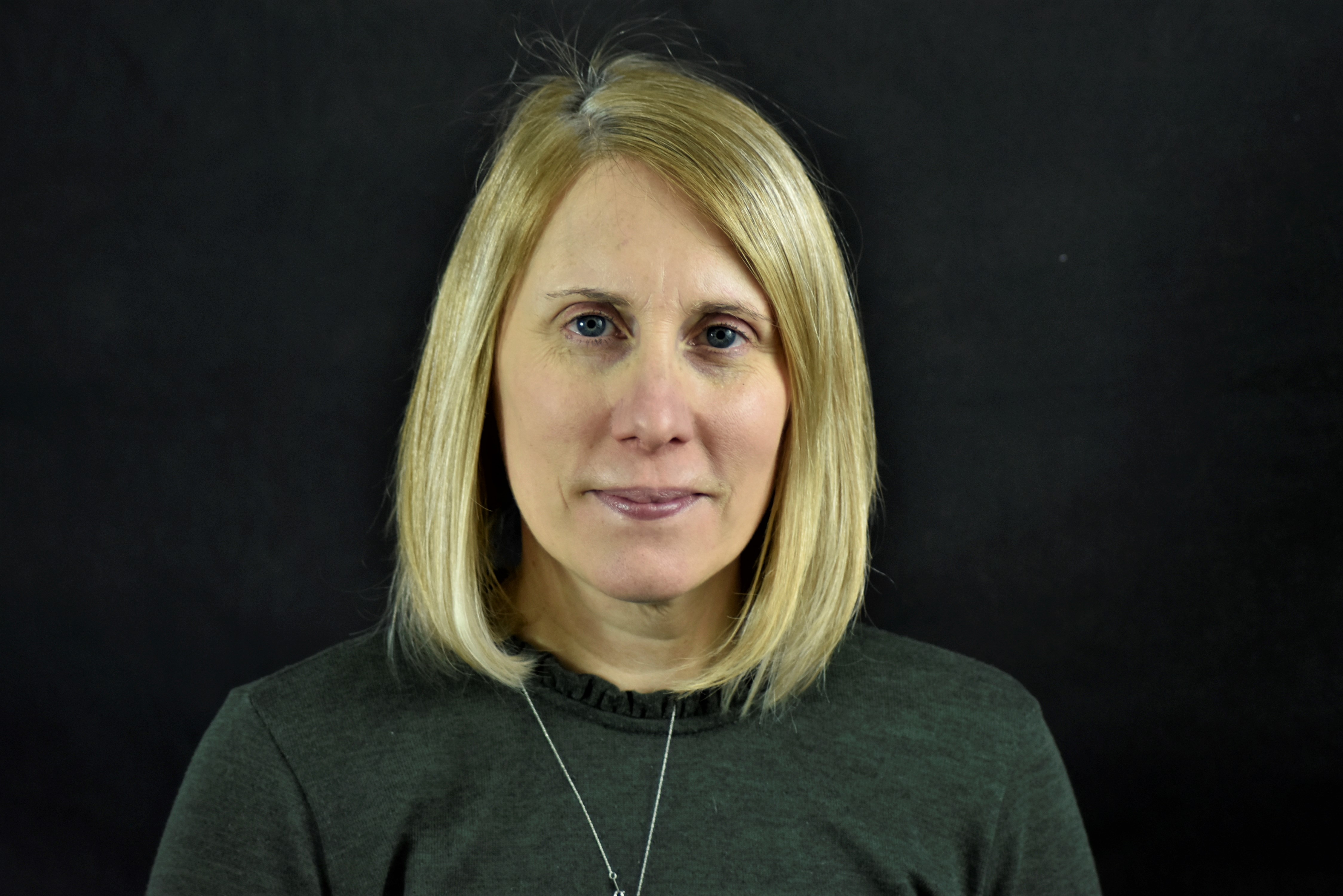 Dr. Johnson earned her BS in Animal Science from Reading University, a Master's in Applied Animal Behavior and Animal Welfare from the University of Edinburgh, and her Doctorate degree in Animal Welfare from Texas Tech University in 2001. Dr. Johnson's current focus at Iowa State University is working in (1) finisher pig transportation, with the aim of reducing the incidence of fatigued, injured, and dead pigs, (2) temporal drinking behavioral patterns of nursery pigs to help swine veterinarians and producers know when the best time of day is to provide oral Ileitis vaccine, and (3) on sow productive lifetime with an emphasis on the sows behavioral repertoire, gait and motion with Drs. Locke Karriker and Kenneth Stalder. Dr. Johnson is active in the International Society for Applied Ethology and the American Society for Animal Scientists, and she serves on the Pork Checkoff's Animal Welfare Committee. In addition, Dr. Johnson provides extension services for commodity groups pertaining to animal welfare issues. Prior to joining ISU, Dr. Johnson was Director of Animal Welfare for the National Pork Board. She developed and implemented Checkoff-funded animal welfare and welfare-related research within the Science Technology Department. Dr. Johnson was instrumental in the formulation and launch of the Swine Welfare Assurance Program. 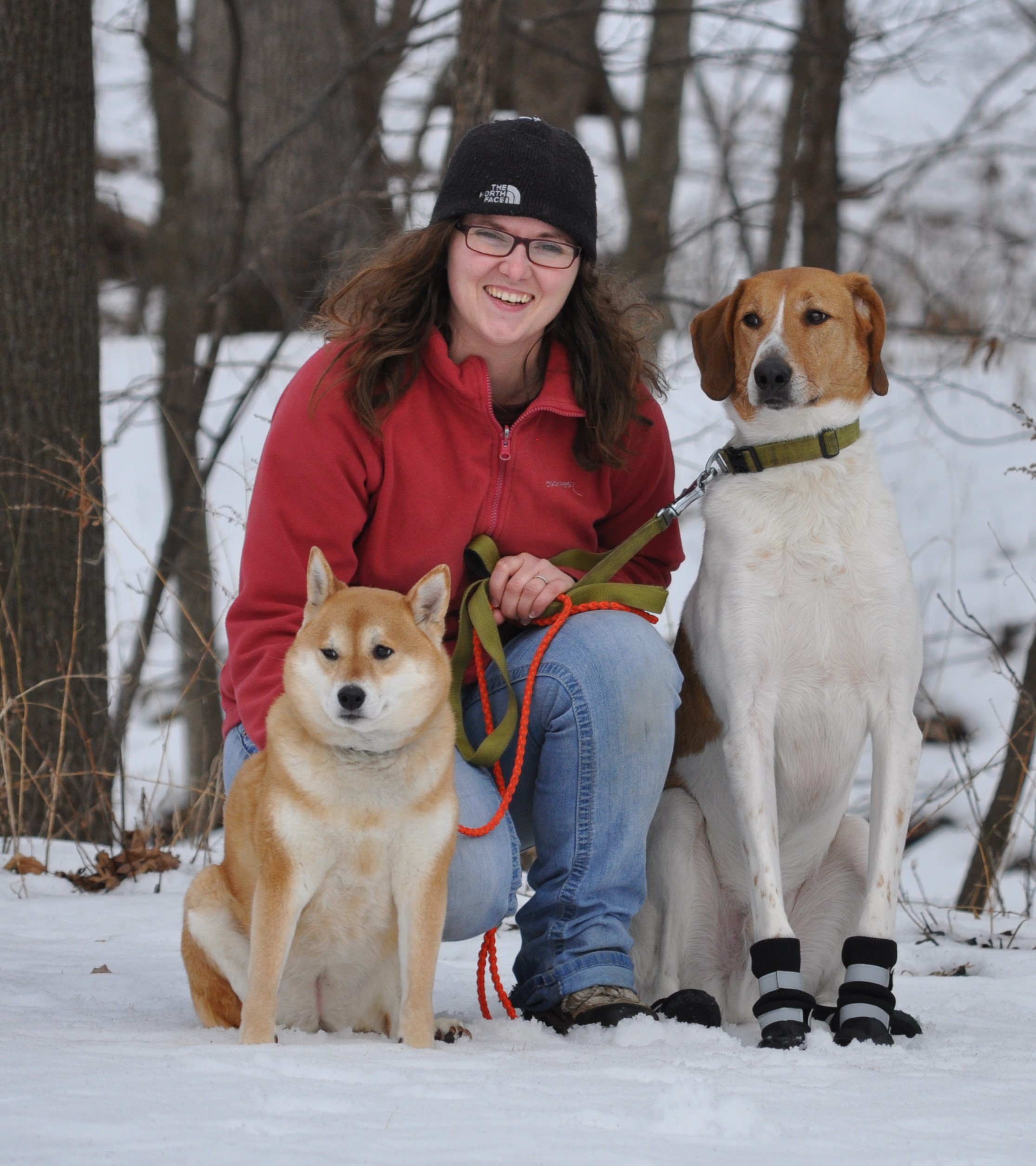 Becky Parsons, MS
Research Associate II
515-294-2829
bparsons@iastate.edu
Becky started working in the Welfare Lab in December 2009 and has been involved with and managed several studies throughout the years with the Welfare Lab. These have included: investigating tools to detect and assess lameness in sows, effects of alternative housing designs on laying hen welfare, studying the efficacy of nerve blocking methods and pain management for disbudding in dairy calves, development and launch of Iowa Swine Welfare School, studying methods of euthanasia in swine and small ruminants, low stress handling methods in beef cattle, and looking into the behavior and cognitive abilities in dogs used as a human model of disease for MPS IIIB. Becky is originally from Iowa and attended Kirkwood Community College before transferring to Iowa State University to finish her Bachelor’s degree in Zoology. Near the end of her undergraduate tenure, Becky became interested in research and with the guidance of two faculty members, who would eventually be on her Master’s POS committee, completed two independent research projects before graduating. Becky remained at Iowa State to complete her Master’s degree in Ecology and Evolutionary Biology studying the effects of natural variation in brood size on growth of and the development of the stress response in nestling Tree Swallows. 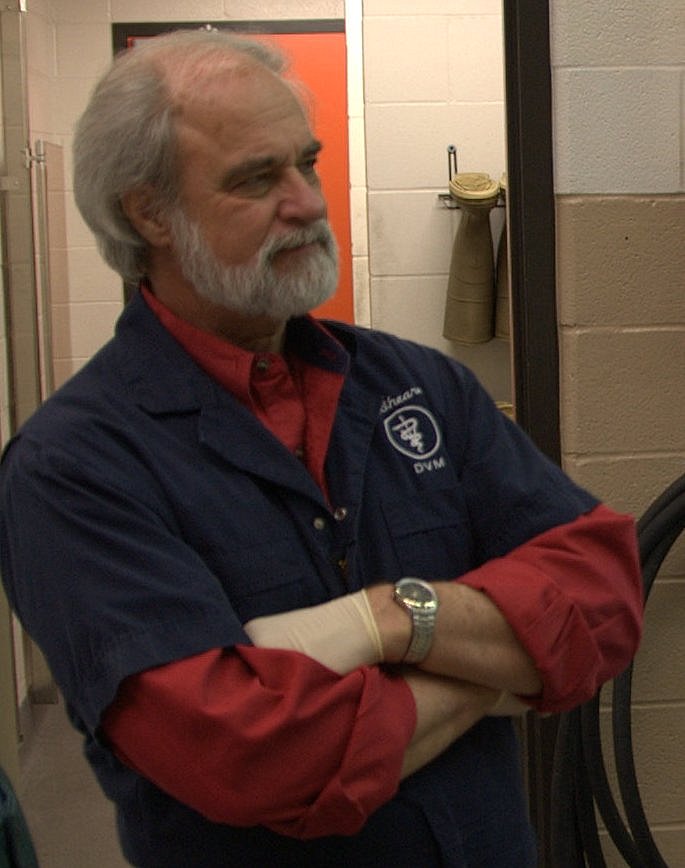 Dr. Shearer is currently Professor and Extension Veterinarian at the College of Veterinary Medicine at Iowa State University. He received his BS degree from Ashland University in 1971, his DVM degree from Ohio State University in 1975, and his MSc in 1981. His primary research interests include management of lameness and foot care of cattle, issues related to animal welfare of livestock and the influence of housing and environment on animal production. He serves as a scientific advisor on several boards dedicated to the continued improvement of animal welfare in livestock production including Humane Farm Animal Care, Dean Foods, and Validus. He is a former Chair of the American Association of Bovine Practitioners Animal Welfare Committee and is currently serving as Chair of the Food Animal Working Group of the American Veterinary Medical Association's Panel on Euthanasia. 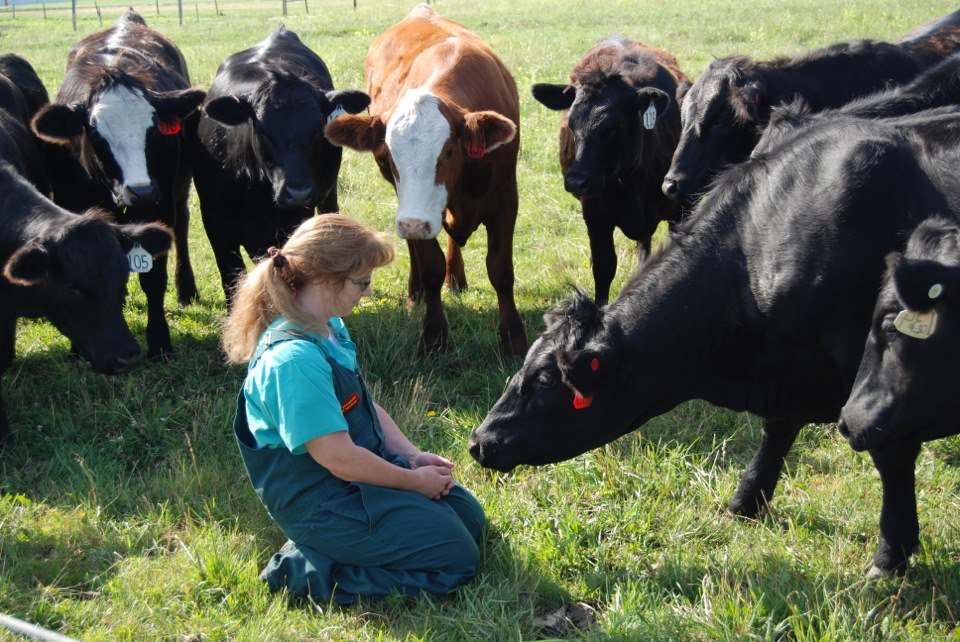 Dr. Reneé Dewell earned her Bachelor of Science degree in Animal Science from Texas A&M and her Doctor of Veterinary Medicine degree from Colorado State University. She owned and operated a private mobile, large animal veterinary clinic for three years. She completed an internship at the Great Plains Veterinary Education Center (GPVEC) under the mentorship of Drs. Gary Rupp and Dee Griffin. While at GPVEC, Reneé worked as a clinical instructor and earned a master’s degree in Veterinary Science (epidemiology emphasis) from the University of Nebraska-Lincoln and completed the Beef Cattle Production Management Program. Following her completion of her MS, she was a post-doctoral researcher at the Animal Population Health Institute at CSU and served as a staff veterinarian at Horton Feedlot and Research Center in Wellington, Colorado. Since joining ISU in 2009, she has worked in the Center for Food Security and Public Health (CFSPH) on topics related to biological risk management for beef cattle as well as disaster preparedness and response issues with production animals. Her primary research responsibilities have focused on cattle handling, practical pain management and production and health management of cattle. Dr. Dewell serves on several committees and leadership roles in the AVC, the AABP, the IVMA, and the AVMA. 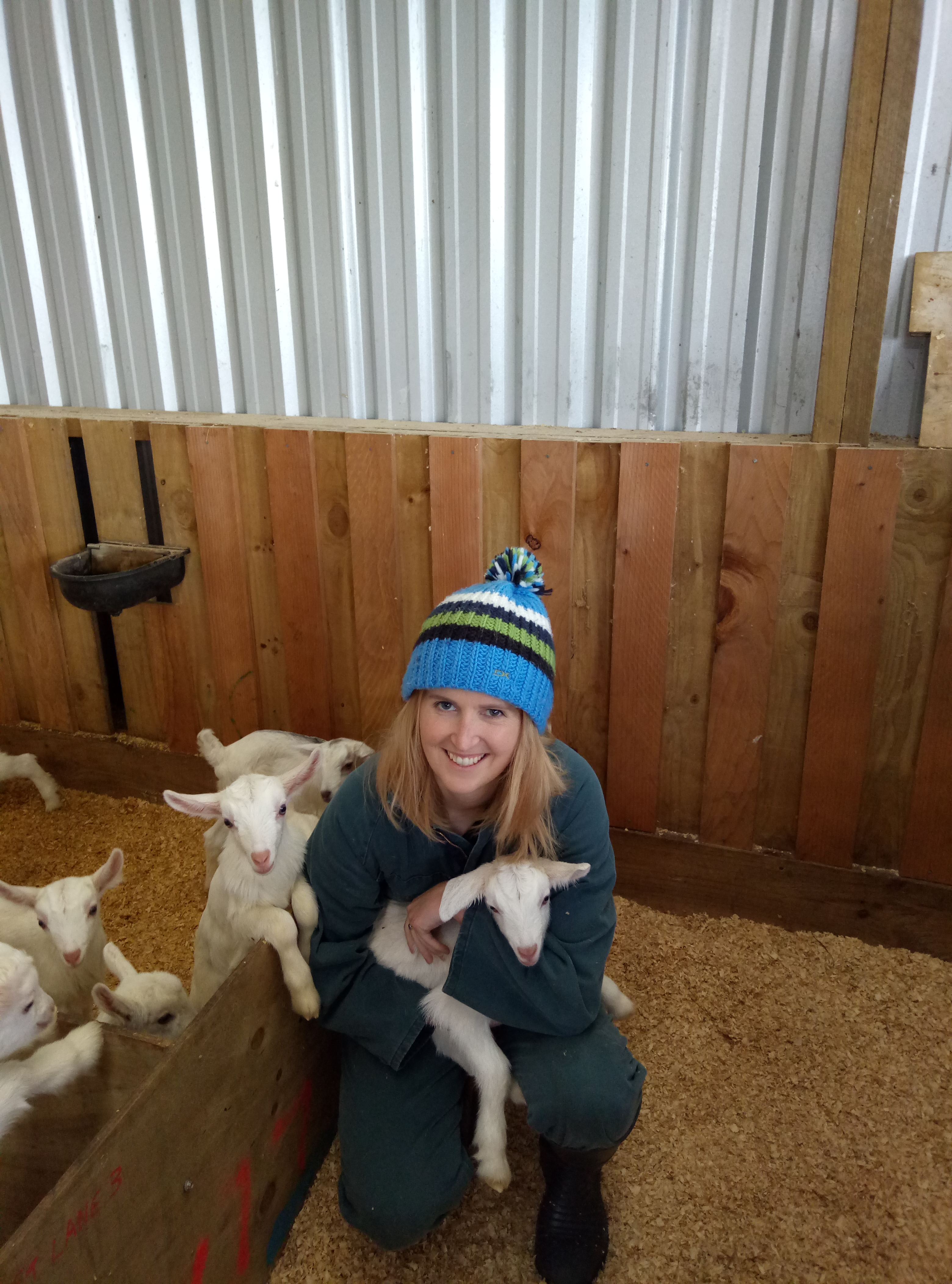 Melissa Hempstead, PhD
Postdoctoral Research Associate
mnh3@iastate.edu
Dr. Hempstead completed her PhD in biological sciences at the University of Waikato and AgResearch in New Zealand in 2018 and her thesis investigated potential improvements for disbudding dairy goat kids to eliminate or reduce pain.  Her research included assessing behavioral and physiological indicators of pain in goat kids, best-practice recommendations for cautery disbudding including efficacious pain mitigation.  Prio to this, Dr. Hempstead completed a bachelor of science with honors and evaluated the behavioral response of goat kids to cautery disbudding.

Currently, she is working alongside Dr. Paul Plummer and Dr. Jan Shearer at Iowa State University, College of Veterinary Medicine on a two-year research project evaluating dairy goat welfare on commercial farms in the Midwest, which includes research evaluating pain mitigation for disbudding and castration of goat kids.

Dr. Robbins was born and raised in rural Iowa. In 2006, he earned his B.S. in Agricultural Science and Environmental Ethics from The Evergreen State College in Olympia, WA where he also managed a small lambing operation. After graduating he worked as Program Director for the Washington State Dairy Federation where he also served as Project Manager for Washington Dairy Industry Research and Education Program.

In 2017, Dr. Robbins earned his PhD from the University of British Columbia (UBC) Animal Welfare Program. Broadly speaking, he is interested in applying psychological theory and methods to the study of human-animal interactions and issues of agricultural sustainability. To date, he has studied the relationship between farm size and indicators of animal welfare; factors affecting public trust in modern food production; effects of non-therapeutic surgeries (i.e. tail docking and ear cropping) on perceptions of both dogs and their owners; and attitudes towards the creation of genetically-modified animals. Dr. Robbins currently works as a post-doctoral Fellow in Dr. Millman’s lab where he is developing animal welfare training curriculum for veterinary students.

Alex joined the Animal Welfare Lab in the fall of 2017.  As a recent graduate from Iowa State University, he obtained a Master’s degree in Biomedical Sciences. Alex originates from Chihuahua, Mexico. He has a background in biotechnology and informatics and with his mind set in research, he has a deep interest in domestic animal behavior and welfare of animals used in laboratory settings. 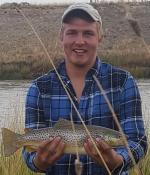 Paxton grew up in a small farming community in Minnesota where he developed his interest in animal agriculture and veterinary medicine. In 2018, Paxton recieved his Bachelors of Science degree in Animal Science from Iowa State University and recently finished up his first year of vet school at Iowa State's College of Veterinary Medicine.  Paxton enjoys working with cattle and has an interest in cattle behavior and handling. He looks forward to broadening his scope of animal welfare and behavior through his work in the animal welfare lab.

Where are they now? Paxton is going into his third year of veterinary school here at ISU. 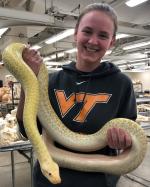 Sam grew up in Lake Zurich, IL where she developed a passion for animals and the environment. Sam pursued her wildlife interest and received her Bachelor’s in Wildlife Conservation with a Minor in Geographic Information Systems from Virginia Tech in May 2018. While at Virginia Tech, Sam participated in a black bear research lab, worked as an aquaculture lab assistant, and learned about food animal production on a dairy farm. As a veterinary student at Iowa State, Sam is excited to learn more about poultry this summer and hopes working in the Animal Welfare Lab will give her new insight into the animal production industry.

Where are they now? Sam is going into her third year of veterinary school here at ISU.

Dr. Jorgensen's research has focused on implementing population health techniques and precision technologies to assess and improve the welfare of young animals in domestic and semi-domestic agricultural systems. He also retains a strong interest in animal behavior and welfare across the realms of domestic, captive exotic, and wildlife. His current work focuses on developing tools for animal welfare instruction in veterinary schools across the United States. He has also been involved as a faculty member at Saint Catherine University in the development and delivery of undergraduate coursework in animal behavior, behavioral ecology, and animal welfare. 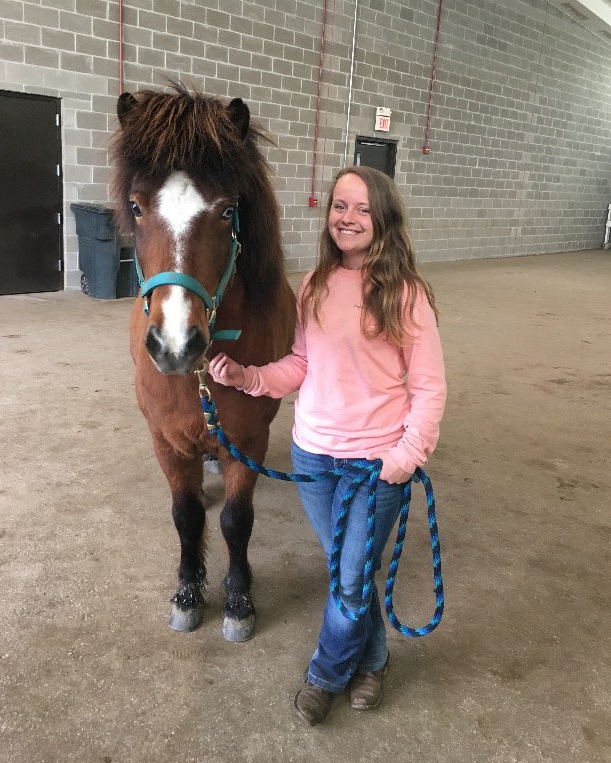 Maddison became part of the welfare laboratory fall of 2014, and assisted with a variety of projects. Some of the projects she was involved with included: swine and small ruminant euthanasia methods, acclimation and low stress cattle handling, and small ruminant disbudding trials. In the fall of 2016, Maddison started her journey in the world of collegiate animal welfare judging contests competing as an undergraduate and currently as a veterinary student. Maddison is currently a second year veterinary student and received her Bachelors of Science from Iowa State University with a major in animal science. Maddison believes that her passion for animal welfare will provide a great asset to her veterinary career path.

Where are they now? Maddi is going into her fourth year of veterinary school. 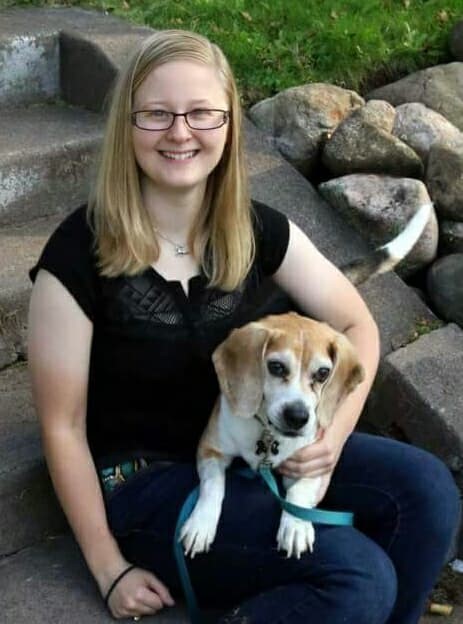 Jessica joined the CVM Animal Welfare Lab in Fall 2017 as an Iowa State Summer Scholars Student. She is a third year veterinary student at Iowa State and is currently the Animal Welfare Club President for the school. Jessica became interested in animal welfare at her undergraduate institution where she studied how tailbiting compromises the health, growth, and welfare of growing-finishing pigs. Previously, Jessica worked with Dr. Still-Brooks and Dr. Millman on a project evaluating the behavioral responses for several alternative methods of disbudding in dairy goat kids.