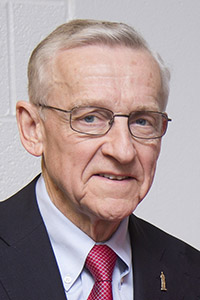 Dr. Roger K. Mahr was honored with the American Veterinary Medical Association (AVMA) Award on Saturday, August 2, during the association's annual meeting in Washington, DC. The award recognizes contributions to the advancement of veterinary medicine.

Mahr received his veterinary degree in 1971 from Iowa State University. Following graduation, he practiced in the Chicago suburbs of Morton Grove and Evanston. And, in 1974, he founded the Meadow View Veterinary Clinic in Geneva, Illinois. For over 35 years, Dr. Mahr has been committed to advancing the veterinary profession at the local, regional and national levels. His leadership roles include serving as president and chairman of the AVMA executive board. Dr. Mahr also held leadership positions in the Chicago Veterinary Medical Association and the Illinois State Veterinary Medical Association, receiving numerous awards for his dedication and service.