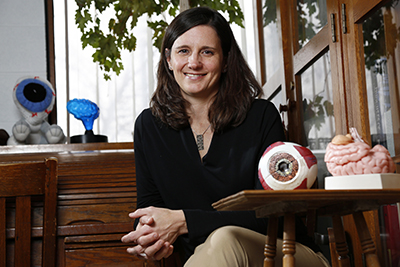 Dr. Heather Greenlee, professor of biomedical sciences, has been named the initial recipient of the second Lora and Russ Talbot Endowed Professor in Veterinary Medicine.

The endowed faculty position is one of three named professorships that the Talbots have established in the College of Veterinary Medicine. Dr. Rachel Allbaugh, associate professor of veterinary clinical sciences, is the holder of the first Talbot Endowed Professor.

Greenlee’s research focus is to study neurodegenerative disease and to develop rapid, non-invasive diagnostic methods for these diseases in both animals and humans.

Greenlee also serves as the Equity Advisor for the College of Veterinary Medicine. Throughout her career, she has been an advocate for diversity, equality and inclusion. While at Iowa State, she has served as a major professor and mentored numerous women and minority students of color.

“The Talbots’ enthusiasm and involvement is as remarkable as their financial gifts,” Greenlee said. “Holding a professorship in their name is both an honor and a responsibility to make the greatest impact that I can within my sphere of influence.”

Greenlee plans to use funds generated from the professorship to support students and enhance her research program as well as her classroom instruction in neuroanatomy.

“We could not be more pleased that Dr. Heather Greenlee has been selected to be the second Lora and Russ Talbot Endowed Professor in Veterinary Medicine,” the couple said. “We are overflowing with pride and enthusiasm. Heather clearly represents the best in the College of Veterinary Medicine and in the veterinary profession.

“As donors, we are really happy to play a role in recognizing and honoring Heather for what she has accomplished. We are inspired by her leadership. In her many roles during her outstanding career, she has skillfully served as a talented and hardworking role model. She stands as a superior example of excellence in the College of Veterinary Medicine.”

The Talbots are long-time supporters of the College of Veterinary Medicine and Iowa State University. The Belmond, Iowa, couple have supported many different areas of the college including multiple four-year and two-year student scholarships as well as graduate fellowships. Their extraordinary gift to the ISU Alumni Association created a first-in-the-nation endowed alumni position for the association’s president and CEO. The couple established completion grant scholarships for undergraduate students and funded significant endowments for the College of Human Sciences’ Fashion Show’s “Best in Show” award and the Merchandising Scholarship.

Lora and Russ received the ISU Foundation Order of the Knoll Cardinal & Gold Award in 2013.  In 2017, the couple was named the recipient of the ISU Alumni Association Honorary Alumni Award and two years later they received the William P. Switzer Award in Veterinary Medicine from the College of Veterinary Medicine. Both are ISU Foundation governors and members of the Order of the Knoll Society of the True and Valiant and the Campanile Society. They are lifetime members and sustaining life donors of the ISU Alumni Association and longtime members and supporters of the Cyclone Club. In the College of Veterinary Medicine, they served as co-chairs of the Campaign Committee for Forever True, For Iowa State. In addition, they were honorary co-chairs of the Alumni Association Campaign Cabinet.

“One of our long-term goals with our philanthropy to the College of Veterinary Medicine has been to endow faculty positions,” the couple said. “That goal is now becoming a reality. We greatly value and deeply appreciate the outstanding high-quality faculty which we have at Vet Med. We have enjoyed many, many positive experiences, interactions, and activities with the exceptional ISU Vet Med faculty.”

The Lora and Russ Talbot Endowed Professors in Veterinary Medicine were designed to be flexible for the areas of veterinary medicine which they can cover and not be limited to a specific area of expertise.

“We desire that they will encompass the entire wide range of veterinary medicine, including but not limited to veterinary clinical sciences, research, and teaching,” Lora and Russ said. “Our target is that our Talbot Endowed Professors be used to support the areas of greatest need and impact. We want to do all we can to help in recruiting, retaining, and rewarding the best and the brightest faculty.”

Greenlee earned her PhD from Iowa State in 1999. She was an adjunct assistant professor in the Department of Biomedical Sciences before being named to the faculty fulltime in 2002.

Dr. Greenlee has been a member of the Iowa Veterinary Medical Association, the Association for Research in Vision and Ophthalmology and the Society for Neuroscience. She has served as a major professor for 19 graduate students during her Iowa State tenure.

The “Lora and Russ Talbot Endowed Professors in Veterinary Medicine” was established during Iowa State University’s Forever True, For Iowa State fundraising campaign, which raised an historic $1.542 billion, to help support Iowa State in becoming the premier land-grant university for the 21st century and beyond.