Back to Her Old Tricks 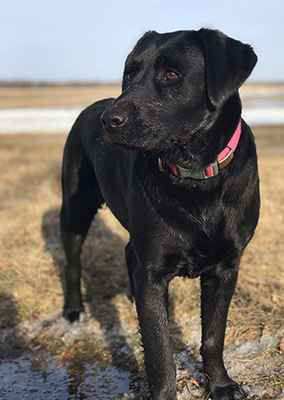 At just 8-months-old, Rylee was an energetic Labrador puppy known for her sweet personality, easy-going nature with a bag of tricks she would perform at the drop of hat.

When her family found her non-responsive, she was immediately transported to her family veterinarian where the initial diagnosis was diffuse tremors. The veterinarian referred Rylee to the Hixson-Lied Small Animal Hospital in Iowa State University’s College of Veterinary Medicine where a team of clinicians quickly went to work.

“When we questioned the family about Rylee’s history, they said they had found some piles of vomit around the house and there were blocks of rat bait found in the vomit,” said Dr. Rebecca Walton, clinical assistant professor in the emergency and critical care unit.

Walton says there are various types of rat baits and the challenge is that they all are labeled under one brand name. This causes different symptoms and require different treatments.

Unfortunately for Rylee, she had ingested bromethalin, which is the most deadly rat baits. The compound causes severe neurologic signs, including seizures, and there is no antidote. And once neurologic signs develop, as was the case for Rylee, the prognosis is very guarded to poor.

Due to the COVID-19 pandemic, the Emergency and Critical Care (ECC) team is on the front lines of treating patients in the Hixson-Lied Small Animal Hospital. Over the past few weeks, the unit has been initially seeing all patients admitted to the hospital before calling in additional specialists.

Despite the obstacles facing both Rylee and her veterinarians, the ECC team started treating the Labrador aggressively for the toxicity due to the severity of her signs.

“Rylee’s family was extremely invested and dedicated knowing that she was a severe case and we were unsure if we could save her life,” Walton said. “We were also unsure what her neurologic status would be long term.”

Rylee was hospitalized for seven days and during that time she slowly showed neurological improvement. Walton said she would still greet people, wagging her tail in appreciation at everyone who cared for her.

“She knows all her tricks and is the same, happy dog her family always knew and loved,” Walton said.