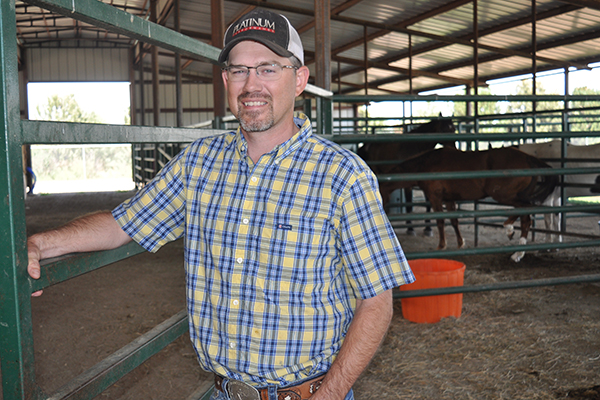 There’s no doubt about it. Josh Zacharias is a horse person.

“I kind of decided to become a vet because I needed a job to pay for my rodeo hobby,” said Zacharias, a 2003 DVM graduate. “Unfortunately I don’t rodeo any more. I’m too busy.”

At Countryside Zacharias specializes in lameness, surgery and podiatry where 85% of his and the clinic’s work is equine-based, much of it Western performance horses.

But it’s another skill Zacharias honed at Iowa State that sets him apart.

In addition to his veterinary credentials, Zacharias is a farrier with 15 years of experience in therapeutic shoeing applications. He first became interested in becoming a farrier the summer between his first two years of vet school.

“I spent some time in the equine clinic and farrier room and saw what it took to specialize in equine medicine,” he said. “It’s here where I got the best advice I ever had.”

That advice? Go to horseshoeing school.

Which is what Zacharias did, attending the six-week Kentucky Horse Shoeing School. He soon became so enthralled by the profession that he jokes he “spent more time with the journeyman resident farrier at Iowa State than I did in a classroom.”

“A large proportion of lameness in horses is attributed to issues with the feet,” he said. “For this reason, many therapies for forelimb lameness include some form of therapeutic shoeing.”

While being a farrier has given him a different perspective to equine sports medicine, it is also a little therapeutic. Zacharias describes himself as an “OCD type person who enjoys the art of shoeing.”

“I enjoyed building shoes, the craftmanship of forging hand-made shoes,” he said. “Now I enjoy getting a foot to function like it should.

“I took up shoeing because I wanted to be a better vet.”