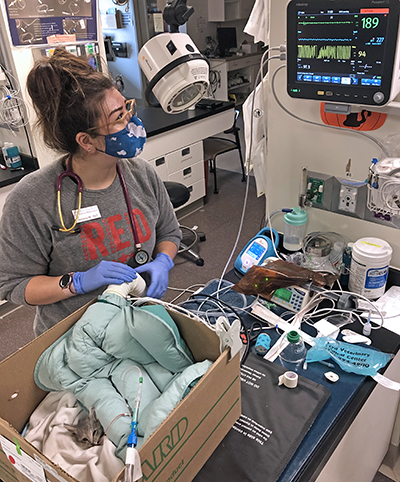 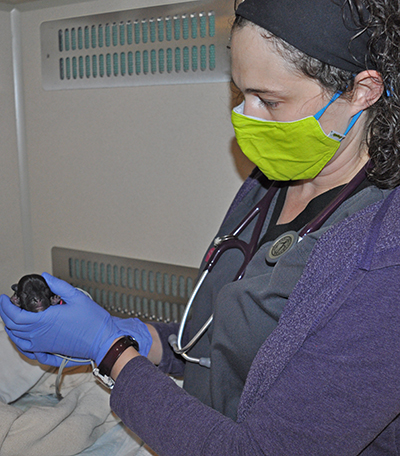 It’s not uncommon for the Emergency and Critical Care unit in the Hixson-Lied Small Animal Hospital to see small patients.

The really small guys – 1 pound or less – are a rare occurrence.

So it was unusual last week when the ICU was home to not one, but two, small companion animals.

The first was a abandoned stray kitten who at five weeks old weighed only 374 grams, that’s just two-thirds of a pound. Typically kittens at that age should be twice that weight. The kitten arrived at Iowa State in poor condition from being on its own too soon.

Also in the ICU was a new-born French Bulldog puppy who tipped the scales at 234 grams or right at a half-a-pound. Since he was born with a cleft palate (an opening in the roof of his mouth between his nose and mouth), it increased his chance of inhaling food into his lung. Upon admittance at Iowa State, the puppy was in respiratory distress.

Dr. April Blong, assistant professor of veterinary clinical sciences, is part of a team that oversees the care and feeding of these two small creatures. Blong says such small kittens or puppies require special care.

“There are a lot more things that have to be attended to in newborns,” Blong said. “Just obtaining an IV catheter ranges from very challenging to impossible.” Blong said the team of clinicians, veterinary students and veterinary technicians were only able to insert the IV in the puppy was through his femur bone. Medication dosage also proves to be difficult.

“They need such tiny amounts of things, we often are measuring with an insulin syringe because the volume is so small,” Blong said. “Assisted feeding is also really important because they cannot maintain blood sugar without regular eating so they often have to be tube fed or maintained with sugar in their IV fluids.

“Very young puppies and kittens must also be stimulated to urinate and defecate because they cannot do it on their own.”

All which requires the Iowa State veterinary team to carefully handle the animals and double check any medication dosages as well as any fluids they are receiving.

Caring for such small and young animals is an unique learning opportunity for fourth-year veterinary students. “While you can hear something in a lecture, until you are faced with the reality of treating this tiny little creature it does not have the same emphasis or meaning,” Blong said. “Learning how to do some of the skills such as tube feeding puppies and kittens is something that can only be learned from doing it.”