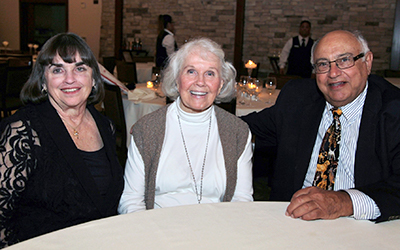 Dr. Bob Bashara has long had a passion for animal welfare. Throughout his career, he has worked with clients to educate them on the benefits of spay/neuter and well-pet care.

And although he was a fan of movie star Doris Day, he didn’t realize they were kindred spirits in this arena.

Bashara (’63), remembers watching “Good Morning America” and seeing an interview with Day about the death of her close friend and fellow actor Rock Hudson.

“At the end of the interview they asked her about her animal foundation and she got big tears when she was talking about it,” Bashara recalled. “I thought, ‘here’s someone who is really passionate about what she was doing.’”

Bashara shared his mutual passion for the spay and neutering of dogs and cats in a letter to the actress. He thanked her for her work with animals and the impact she had on animal welfare.

He didn’t think much about the letter after that. And he for sure didn’t expect a response – least of all the response he got. While on a trip to California, Bashara and his wife Jan stayed at Day’s hotel in Carmel.

“When I returned home, there was a note on my office door marked ‘personal’  – Doris had replied to my letter and asked me to let her know the next time I was in California,” Bashara said.

A lunch among the three cemented a fast friendship between the Omaha veterinarian and the Hollywood star and the start of a second career for Bashara. Today Bashara, retired from his Omaha practice, is the chief financial officer of the Doris Day Animal Foundation (DDAF). He also serves as Day’s business manager for her entertainment ventures.

In his roles, he has raised additional funds to support hundreds of organizations across the nation who house, feed and provide veterinary care to thousands of rescued animals every year. He continues to oversee the grantee-selection process and all financial aspects of the DDAF.

Day also founded the Doris Day Animal League (a lobbying organization which advocates for animal welfare legislation) and under its auspices started Spay Day USA which has now become World Spay Day operating in 43 countries. Bashara works closely with the Humane Society of the United States in administering the program which has resulted in the spaying and neutering of more than 1.5 million animals since 1995.

“I work with the Foundation every day and have been a longtime supporter of the Humane Society and their efforts to rescue animals,” Bashara said. “Just like Doris, I’m passionate about rescues.”

One such rescue was Duffy, a Maltese the Basharas rescued in Omaha and gave to Day. The dog had been left on the Nebraska Humane Society’s doorsteps and was in poor, physical shape. The Basharas nursed it back to health.

“Duffy became a great pet for Doris,” Bashara said. “She had just lost a small white dog and I knew she would love him.”

The DDAF now has a Duffy Day Lifesaving Program, giving a second chance to disadvantaged animals that may otherwise be euthanized. The program has served as a fundraising model for shelters across the country.

“I do enjoy what I do,” Bashara said. “I consider myself retired from veterinary medicine, but the Day Foundation has been like another career.