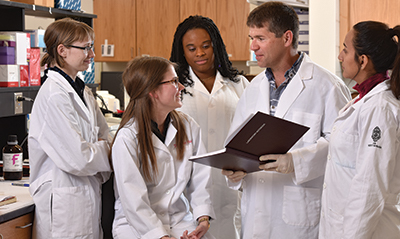 The Hunt for Viruses

Zika, West Nile, Ebola, Influenza – all viruses – are known to the public because of the attention given when outbreaks occur. But, at one point, each of these viruses was only known to a select few – the person or person(s) who first discovered them. The Virus Hunter.

Brad Blitvich, PhD, is a virus hunter. In his lab at the College of Veterinary Medicine, this professor of veterinary microbiology and preventive medicine, searches for viruses. Not ordinary viruses, mind you, but arthropod-borne viruses (arboviruses) – viruses that can be transmitted to humans and animals by infected insects (arthropods).

In the past 20 years, there has been a growing threat to animal and human health by native and recently established arboviruses from other countries. These viruses, like Zika and West Nile, are transmitted by the mosquito. Virus hunters, like Blitvich, have a worthy opponent in the mosquito who is a wonderful disease host. Pathogens can hitch a ride in the mosquito or other insect, who, in turn, can infect humans and animals via its bite. Finding and identifying these arboviruses before they become tomorrow’s headline is the quiet bench-work that scientists like Blitvich do every day.

Blitvich has spent his entire research career studying insect-transmitted viruses, discovering several novel viruses from the midwestern United States and Mexico. This summer, he and his team discovered a novel virus from Iowa. “Mosquito-borne viruses are often named after the geographic location where they were first discovered,” Blitvich said. “We had a list of 10 potential names, and I let our veterinary student summer scholar, Stefanie Hurt (’20), name it. She chose ‘Skunk River Virus’ which is the river close to where the mosquitos were collected.”

How do scientists look look for novel viruses? In this case, the team obtained mosquitos from the ISU Medical Entomology Laboratory that were collected from various counties in Iowa. The mosquitos were pooled according to where they were collected, ground up, and inoculated onto a mosquito cell line. The researchers waited a week to give any virus that is present time to replicate. Then the RNA was extracted and mass sequencing (metagenomics) was performed. The sequences were analyzed using a computer to identify known and unknown viruses. The metagenomics identified a novel virus in the group collected from the Skunk River.

One of the challenges in doing discovery work, says Blitvich, is finding someone who can reliably analyze all of the metagenomics data. “For the summer research study alone there were millions of sequences that had to be analyzed,” Blitvich adds. “We’re fortunate to have someone in my lab who can do that.”

“Our next steps will include a full sequence of the genome,” Blitvich said. “All we know right now is that the virus can infect mosquitoes. We plan to determine whether the virus can also infect human cells and vertebrate animal cells.”

As the hunt for viruses continues, Blitvich and other scientists conduct research every day – not only to determine the significance of the virus, but if it is significant, to develop strategies to detect them in populations, as well as surveillance and monitoring strategies.

Blitvich is the recipient of the 2017 Zoetis Award for Veterinary Research Excellence at the College of Veterinary Medicine. He earned his PhD from the University of Western Australia, in 1996. Blitvich joined the faculty at Iowa State, after completing his post-doctoral training at Colorado State University.