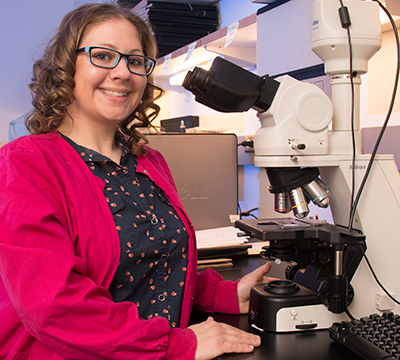 TB or not TB

Now the 2016 DVM and graduate student in immunobiology, through the Department of Veterinary Microbiology and Preventive Medicine is taking part in a research study looking into a novel Mycobacterium tuberculosis complex pathogen.

Through her interaction with the National Animal Disease Center (NADC) in Ames, Kanipe has been studying tissues from mongooses from Botswana looking for Mycobacterium mungi, which is part of a complex related to human tuberculosis (TB). This pathogen infects and kills banded mongooses through olfactory communication.

This is important because it is the first case of a tuberculosis-complex bacterium pathogen being transmitted through olfactory communication networks. Since the organism is closely related to human TB and can be transmitted through the environment, it provides a chance to further understand TB organisms.

Kanipe’s involvement with the project comes solely from her work in the lab.

“We would get a big bag of tissues that we’d have to identify, sort through, process and look for signs consistent with this strain of tuberculosis,” she said.

Sounds easy, but Kanipe explains that wasn’t always the case. The mongoose samples were picked up in Africa and then transported to Ames for study.

“These were unique samples,” Kanipe said. “The carcasses may have been sitting in the African sun for days before they were recovered. Others had been run over by vehicles or scavenged by dogs.

“Sometimes I would look at a slide and the tissue was already starting to break down. I couldn’t read some of these, they just looked like rotting tissues.”

Kanipe estimates about a third of the slides she looked at were unusable for the study.

The study intrigued Kanipe because of its potential impact on both human and animal health. While tuberculosis is rare in the United States, it is a devastating disease elsewhere around the globe.

“I have a special interest in third world and improvised countries,” she said. “World-wide, tuberculosis is a huge issue and if I can affect both human and animal health in a small way that’s great.

“I’m very lucky to have the opportunity to work with the NADC on this project,” Kanipe continued. “It has definitely broadened my horizons. It was a very exciting project to work on.”