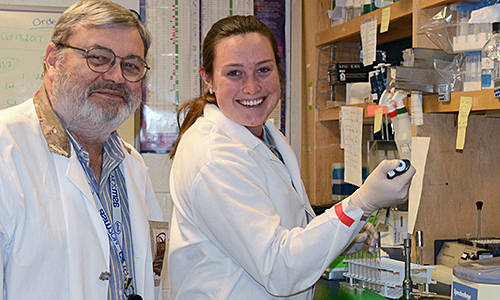 30 Years in the Vet School

Dr. Chris Minion came to Iowa State University in 1986 for the research environment offered by the College of Veterinary Medicine.

He stayed because “Iowa State is a great place to work.”

For the past 30 years, Minion, professor of veterinary microbiology and preventive medicine, has contributed to Iowa State’s reputation as a top tier research institution through a productive and internationally recognized research program that has made significant contributions in several areas.

“What drew me here was the research environment,” Minion said. “I work with mycoplasmas and when I interviewed, there were two other scientists here working in the same area.

“Together the three of us made one of the largest mycoplasma research groups in the world.”

Three scientists researching mycoplasmas at the same school is a big deal since Minion says “there aren’t a lot of us, maybe 300 worldwide.” And when he came to Iowa State, he had another leap of faith to take.

“I have a medical school background and I always assumed I would work in a med school,” he said. “Never in my wildest dreams did I think I would spend my career in a vet school.

“However, the biomedical environment is not really that much different in a vet school than it is in a med school.”

Minion’s interest in mycoplasmas came out of the blue.

“I hadn’t heard of mycoplasmas before I went to grad school,” he said. “But once I started learning about it, I was intrigued. I thought it was a good model to study and I got hooked.”

He also became proficient in the area. His research career has led to pioneering work in establishing cloning techniques in mycoplasmas. His leadership has led to establishing a reference library of sequenced mycoplasma strains important to both animal and human health.

He also made significant contributions to food security through his work with E. coli 0157:H7, diagnostic assays and vaccine development.

Minion’s roles at Iowa State haven’t been solely dedicated to a research lab. He has played major roles in the establishing of the nationally recognized interdepartmental graduate programs on campus including molecular, cellular and developmental biology and microbiology. While on campus he has served as major professor for 18 graduate students.

Minion has also actively participated in Faculty Senate, serving in leadership roles and on more than 50 different committees across campus. And like his move into mycoplasma research, Minion never dreamed he would be so active in non-teaching or non-research activities.

“I swore I would never get involved with Faculty Senate,” he said. “My department needed a representative and since everybody has to do double duty I volunteered.”

And like his work with mycoplasmas, Minion soon began to enjoy his time on Faculty Senate.

“Once I got into it I was fascinated by it,” he said. “I was fortunate to get on a lot of interesting committees. Plus, you get a very different perspective of the University.”

Minion’s work with Faculty Senate, along with his research and teaching activities was a major factor in his selection this fall as a recipient of the Regents Faculty Excellence Award. He is only the fourth College of Veterinary Medicine faculty member to receive this award.