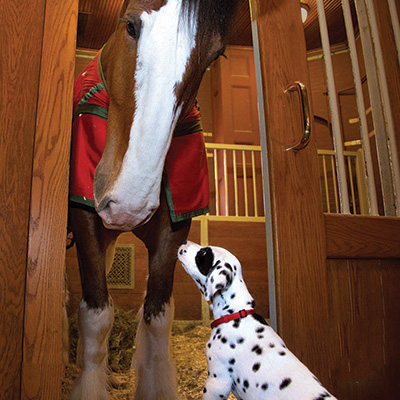 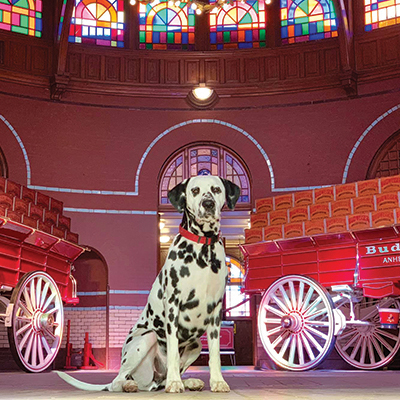 Without a doubt, the Budweiser® Clydesdales are the most easily recognized horse team in the country. They made their first appearance at Anheuser-Busch in 1933, to celebrate the repeal of Prohibition. Ever since, the Clydesdales have been attracting crowds at parades and sporting events across the country.

A St. Louis Cardinals’ fan, Rosie Branaman has always had a fondness for the Budweiser Clydesdales. But these days, Branaman’s attention is on the Dalmatian that sits on the wagon. Branaman, a histology technician in the Iowa State Veterinary Diagnostic Laboratory, has bred and shown Dalmatians for 30 years.

Five years ago, she was contacted by Budweiser Clydesdales. They were looking for a new puppy. At the time, she didn’t have a litter, and referred them to a fellow Colorado breeder.

“I was able to follow how that pup was treated and handled,” Branaman said. “When they needed another puppy, I was willing to sell one to them.”

“I haven’t seen Barley since he has been with the East Coast hitch, but I did see Bud when the Midwest hitch made an appearance last summer in Davenport, Iowa, during a Quad Cities River Bandits baseball game.”

The Dalmatian didn’t join the Clydesdales hitch until 1950. Not likely to lose its place as the Clydesdales’ mascot any time soon, the Dalmatian is the perfect dog for the job. “Dalmatians were coach dogs in England and transitioned to the horse-drawn fire wagons,” said Branaman. In those days, they were trained to protect the horses and the contents of the wagon, and to keep other dogs away from the horse-drawn fire trucks as they rushed to a fire.

As the Clydesdales’ mascot, the Dalmatian sits on the wagon with the hitch driver. Each hitch has two dogs associated with it. “A typical appearance at a state fair might be for several days, with whole-hitch parades twice and several meet-and-greets with a horse and dog,” Branaman said.

Not every Dalmatian is suited for the job. “The dog has to enjoy being around a lot of people, and have the temperament for the travel,” Branaman said.

Although Dalmatians can have black or liver-color spots, the Budweiser Dalmatians all have black spots. "Barley is easy to identify,” says Branaman, “he has a patch around his eye and one on his back.”

Bud and Barley are males. But, the “glass ceiling” of the kennel has been broken, Budweiser has both male and female Dalmatians on the hitches. “The female Dalmatians do tend to be a bit more independent than the males,” said Branaman. All dogs undergo training and the new dogs are paired with an older dog to learn the ropes.

The hitches travel around 10 months of the year. And, just like people with a job, the Dalmatian will retire, too. “The St. Louis brewery usually has a couple of retired dogs that stay there; otherwise the dogs find forever homes with employees,” Branaman said.

When asked whether Bud or Barley have appeared in those greatly anticipated Budweiser commercials during the Super Bowl, Branaman says no. She does, however, have a favorite Budweiser commercial involving the Dalmatians. “The two Dalmatians separated at birth. One puppy grows up to be a fire station dog; the other a Budweiser dog. Later they pass each other on the road, and the Budweiser dog on the hitch sticks out his tongue at the dog on the fire truck.”