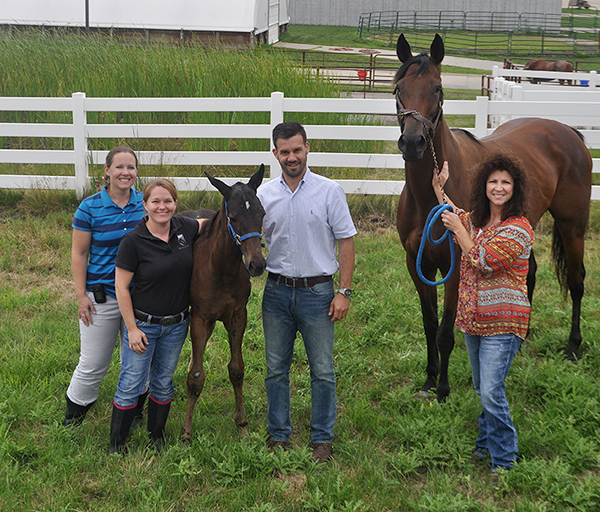 The equine veterinary staff at the Lloyd Veterinary Medical Center have become quite familiar with D’Kela Sunrise almost since her birth last May.

The foal was born three weeks premature and has made several visits to Ames and the large animal hospital in her lifetime for various treatments. But it was a highly unusual surgical procedure and subsequent treatment that saved D’Kela’s life.

Two months after her initial visit to the Lloyd Veterinary Medical Center for failing to nurse well, the filly’s owner, Bethany Kinney, found her one evening bumping into the walls of her stall. She immediately brought D’Kela and the mare to the LVMC.

An examination by Drs. Brett Sponseller and David Suarez-Fuentes, on-call surgery resident, confirmed the worst – there was something dramatically wrong. She would persistently circle in her stall. She had little to no vision in her left eye. And she would fall if not supported.

The signs suggested a brain issue and antibiotics and anti-inflammatories had little or no effect on the filly’s condition.

“When D’Kela failed to improve significantly over the first few days and finally started to show signs of seizures, her owner knew it was time to make a choice,” Sponseller said.

Kinney immediately agreed to continue the filly’s care with an advanced imaging of the brain.

But there were other, non-medical complications. It was early Sunday morning and the large animal hospital wasn’t at its normal weekday staffing levels. That didn’t matter as specialists starting pouring in to assist.

Riedesel soon confirmed what was previously thought. An abscess took up almost 20 percent of the left side of the filly’s brain.

In Kinney’s mind, there was just one choice to make.

“The doctors advised me on the risks and told me surgery was really her last chance of survival,” she said. “I knew she was a fighter from day one, so there was no way I was going to give up fighting for her once she started having troubles.”

The team effort of taking care of D’Kela continued when neurology department members Drs. Nicolas Jeffrey and neurology resident Ilyssa Meren, arrived to perform the delicate surgery. The surgical team was supported by Drs. Kevin Kersh, Ruby and Suarez-Fuentes, along with veterinary technicians Amy Dennis and Tiffany Wilcox, who provided care before, during and after surgery.

The surgery required the veterinarians to make a small incision into the filly’s skull. Surgical equipment was inserted and used to carefully remove the material within the abscess. Six hours after going under anesthesia for the MRI, the surgical procedure was finished and D’Kela was recovering from anesthesia.

“This was the point where the future was truly unknown,” Sponseller said. “D’Kela had been unable to stand before surgery due to frequent seizure-like activity. We didn’t know when she woke up from anesthesia if she would show signs of improvement or not.”

Despite being under anesthesia for six hours, when the filly woke she was a different horse. Within an hour she was aware of her surroundings. Under the watchful eye of students, staff and residents, by that evening she was able to stand, walk on her own and nurse from the mare.

“I remember walking into the hospital the next morning and seeing Dr. Suarez just shaking his head and saying ‘it was amazing,’” Kinney said. “When I walked into her stall and saw her I was overcome with so much emotion that all I could do was kiss her nose, tell her how much I loved her and cry.”

D’Kela soon returned home and Kinney reports the filly is growing like a weed. “This filly is a testament to what can happen when an owner’s commitment and a dedicated team come together to help save a life,” Sponseller said. “If one person had said no or had not answered their phone on their day off, we might not have had such a happy ending.

“While this surgery is considered extremely rare to perform in large animals, it is equally as rare to have such a great opportunity for five of our hospital sections to be able to come together to save a very special life.”