A Giant of Higher Ed

Founder of the United Negro College Fund. President of Tuskegee Institute for 20 years. Driving force behind the formation of the Tuskegee Airmen during World War II. Recipient of the Presidential Medal of Freedom.

Patterson earned his DVM (’23) and master’s degree in veterinary pathology (’27) from Iowa State. Born in Washington, D.C., Patterson attended Prairie View Normal School where he came in contact with Dr. Edward B. Evans, who also graduated from Iowa State and the College of Veterinary Medicine.

Evans became a mentor to Patterson and encouraged him to enroll at Iowa State to earn a veterinary degree. And even though Patterson was only African-American in the school during his tenure, he wrote years later that his experience in Ames was a positive one.

“In the veterinary program, I did not feel odd being a part of the group of students working in the veterinary clinic although I was the only black person there,” Patterson wrote in his autobiography, Chronicles of Faith. “The absence of animosity encouraged me to see veterinary medicine as a field in which I could practice without being hampered by the racial stereotypes and obstacles that would confront me as a medical doctor, for example. I found the teachers of Iowa State helpful whenever I approached them. Educationally, it was a fine experience.”

After graduating from Iowa State, Patterson became the director of agriculture at Virginia State College before moving to the Tuskegee Institute where his brilliant career moved forward.

He became Tuskegee’s president age 34 in 1935 and for the next 20 years transformed Tuskegee into a full-fledged university with graduate programs that continue to this day. In addition to spearheading Tuskegee’s engineering and commercial aviation programs, Patterson founded the School of Veterinary Medicine in 1944. 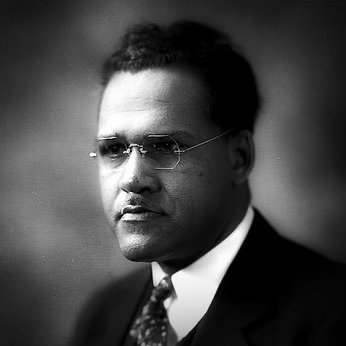 In recognition of the legacy and achievements of Dr. Frederick Douglass Patterson (DVM ’23), the College of Veterinary Medicine has created new scholarships in his honor.

The Frederick Douglass Patterson Diversity and Inclusion Award will be awarded annually to the CVM faculty and/or staff who have advanced the college’s mission of diversity, equity and inclusion.

The Frederick Douglass Patterson Scholarship was created to honor the personal merits and attributes of Patterson, who served as president of the Tuskegee Institute and is the founder of the United Negro College Fund. Scholarships will be awarded to current and incoming DVM students.

Individuals wishing to contribute to the Frederick Douglass Patterson Scholarship can contact the CVM development team at vetmeddev@iastate.edu or 515-294-0867 or make an online donation.