Grooms is greeting Michigan State University veterinary students as they get their first look at the school’s Clinical Skills Laboratory. This is a task that Grooms could probably delegate to someone else, but he wants to be here to work with students.

Student group after student group descends upon Grooms’ station in the lab where he instructs them on biosecurity measures they need to utilize anytime they step foot upon a farm. This is a task he does from 8 a.m. to 5 p.m. with just a few short breaks.

Despite the repetitive nature of the course, Grooms’ enthusiasm for teaching never wanes. He’s instructs the last student of the day with the same zeal as he had for the early morning class.

That’s nothing unusual according to his Michigan State co-workers. In fact, it’s par for the course.

“Students know he’s leaving (Michigan State) and they’re coming in by the droves to pick his brain. He really enjoys helping students and truly wants them to succeed.”

It’s not just students Grooms works with to succeed.

Dan Grooms’ journey to becoming the dean of the oldest veterinary college in America began in a small farming community north of Columbus, Ohio. Even though his father was a school teacher and his mother was a nurse, Grooms was still a farm kid.

That background came courtesy of his grandparents, who raised dairy and beef cows. The young Grooms showed cattle at 4-H and FFA competitions at the county level.

“Even in high school I knew I wanted to be involved in agriculture in some way,” Grooms said.

He tracks his love of veterinary medicine back to an incident that occurred just before he entered high school.

“We had this Angus steer I was going to show at the county fair,” Grooms recalls. “It must have weighed 800 or 900 pounds and he got out of his pen and into a cornfield where he proceeded to gorge himself on the green stalks.”

The steer became seriously ill and the local veterinarian was called.

“I remember him saying ‘he would do his best,’ and he came out every three to four hours to look at the steer,” Grooms said. “I thought to myself, ‘this guy really cares about us and our animals.’

“That’s what got me thinking about becoming a veterinarian.”

While an undergraduate at Cornell University, Grooms started out in agricultural engineering before quickly switching to pre-vet. He went to veterinary school at The Ohio State University and after graduating with his DVM, Grooms returned to his hometown where he worked in a mixed animal practice.

“It was truly a mixed animal practice” Grooms said. “We treated horses, dairy cattle and swine in addition to companion animals. I enjoyed it and the people.” However, early in his training at Ohio State, a seed was planted when Dr. Kent Hoblet, currently the dean of the College of Veterinary Medicine at Mississippi State University, suggested Grooms would make an excellent extension veterinarian.

“I always had it in the back of my mind that I wanted to do that type of work,” Grooms said.

So, when the opportunity to earn a PhD in veterinary preventive medicine at Ohio State came his way, Grooms didn’t hesitate. While completing his advanced degree, Grooms worked at the Ohio Agriculture Research and Development Center where he spent four years honing his skills to become a research and extension veterinarian.

He joined Michigan State in 1997 and worked as a beef cattle extension veterinarian for the next 17 years before becoming the chair of the school’s Department of Large Animal Clinical Sciences.

And while he enjoys his job, Grooms has a special spot in his heart for working with livestock producers.

An expert in bovine infectious diseases, Grooms is a natural as an extension veterinarian. The personality traits that his Michigan State co-workers stress are echoed by the livestock producers he works with far from East Lansing. “What I’ve always liked about Dan is his natural ability to teach,” said John Stoneman, proprietor of Stoneman Feedlot. “Over the past 20 years, I bet I have seen or talked to Dan every couple of weeks.

“I could always pick up my phone and if I didn’t get him right away, he would always call back.”

Whitney Smith, his assistant at Michigan State, says it was not just John Stoneman’s calls Grooms would return.

“Even now, four years into this job, he still takes calls from farmers,” she said. “It sounds like a cliché, but his door really is literally always open. He’ll talk with a student, even if he has only five minutes before his next meeting.’’

“If the door is open, I should be willing to talk to you,” Grooms says.

Smith and Stoneman aren’t the only folks from Michigan State singing Dan Grooms’ praises. It was a universal theme among the multitude of individuals interviewed for this article.

Dr. Frank Nickels, large animal surgeon… “I can’t say enough about Dan. He has done a wonderful job at Michigan State and moved this department forward. I think the world of him and his family.”

Dr. John Baker, emeritus dean… “Dan’s just a solid guy. He’s as honest and straight-shooting as anyone you will come across. When Dan tells you something, you can bank on it.”

Dr. Betsy Carr, associate professor in the Department of Large Animal Clinical Sciences… “When Dan told us he was leaving Michigan State for Iowa State, I had to walk out of the room because I realized what we were losing in Dan. He’s a great leader, a great mentor and a great friend.”

Dr. Andy Claude, associate professor and section chief in anesthesia and pain management and a 1992 Iowa State DVM graduate… “Dan is open, honest and has no agenda. I’ve leaned often on Dan and he has always helped me come up with solutions to the department’s problems. He will be a perfect fit at Iowa State.”

Dr. Bill Horne, professor in anesthesia and pain management and a 1981 Iowa State DVM graduate… “Dan is well-prepared to succeed as dean at Iowa State. I can’t imagine anyone better suited for this job than Dan Grooms.”

Jackie Maeroff, a fourth-year DVM student… “I enjoyed both the research side and clinical side of veterinary medicine and I couldn’t decide what I wanted to do. Dr. Grooms met me for coffee to talk it out. That conversation helped me tailor my externships in the direction I want my career to go towards.”

Oscar Benitez, PhD student in Grooms’ research group… “Every time I need
to talk to Dr. Grooms, I knock on his door and he always asks me in, without fail. I was a little nervous when he told me he was leaving for Iowa State and what did that mean for my degree, but he told me he would be available on Skype, Zoom, that I could call him, text him. ‘I’ll be there for you,’ he told me. I have no doubt he will be.”

Being a part of a team has always been important to Dan Grooms. In high school he was a football, basketball and baseball star and was recruited to Cornell as a quarterback.

A broken wrist suffered during his senior year in high school however, put the throwing quarterback “behind the eight ball.” “I never caught up,” he said “After two years, I made the decision that my aspirations were to be a veterinary student and I gave up football to focus on academics.”

But the leadership skills Grooms developed while the captain of his football team and president of both his local 4-H and FFA, remain with him to this day. “To me, this job is all about leadership,” he said.

“I want to help people and organizations do the best they can do. Building teams that get things done, that effectively solves problems, that’s what I strive to do.

“I want to be supportive of people, help them succeed but also hold them accountable.”

Smith almost laughs when asked the question about Grooms’ dedication to teamwork.

“Teamwork is maybe his favorite word and definitely one of his highest priorities,” Smith said. “He works hard to get us working together as a group.

“And he walks the walk. He shows up for everything we do as an office – even if it’s a baby shower.”

For Grooms, teamwork is perhaps the most important aspect to making the College of Veterinary Medicine a successful venture.

“Anytime you manage this complex of an entity, you have to have a good team,” he said. “People have to be good at their jobs and work well together.”

Away from the Job

One of Grooms’ co-workers, Tammy Pike, a secretary in the Department of Small Animal Clinical Sciences, says she always wondered if Dan Grooms actually had 32 hours in every day.

Smith says Grooms is in the office by 6 a.m. and often doesn’t leave until 12 hours later. Still the new Iowa State dean finds time for a life away from the office.

It may be years since Grooms donned a football uniform, but crisp Friday evenings in the fall will still find him on the football field. For 21 years, he has officiated high school football in Michigan. He has moved from umpire to back judge and most recently he has been the crew chief and referee to his close-knit officiating crew.

“Dan is real when he talks about team and teamwork,” said Russ Hewitt, a member of Grooms’ officiating crew. “It’s kind of cool to watch Dan teach the less experienced guys on our crew. He asks questions in an attempt to have the answers lead into what is the correct way to do things.”

“I like football,” Grooms says. “Football was important to my life and I wanted to give back. Once I figured out what officiating was all about, it was a nice way to get away from work.”

Grooms and his crew officiate between 12-15 varsity games and a handful of sub-varsity (junior varsity) games around the East Lansing area a year.

Even that isn’t enough for him as he has volunteered to officiate youth football games Sunday afternoons in his East Lansing suburb of Williamston.

“This is a chance to teach kids about the rules,” he said. “I recruit a couple of younger students to help officiate and hopefully they will continue.”

Grooms volunteers as much as he can find time for. He was a member of the Williamston Football Booster Club for 10 years, including serving as president for two years. He serves on the church council of his Lutheran Church in East Lansing and has mowed the church’s lawn in his spare time.

“I would rather be busy than wondering what I need to do next,” he said. “It takes time, but I watch very little TV, although I do like to read.”

In the end though, Grooms’ volunteer work is more about giving back instead of wondering what to do next.

Make no mistake about it, Dan Grooms is anxious to begin his new challenge at Iowa State. Leaving Michigan State University’s College of Veterinary Medicine however wasn’t an easy decision for him or his wife Donna to make. You would expect that after spending 21 years in the same place.

“We’ll miss the people,” Grooms said. “We have 21 years of friendships and people we’ve worked with.

“It will be difficult but we’re going to a great place. At Iowa State there are new people and new opportunities to work with.

“I’m excited for this chance to work alongside our talented team to deliver excellence in the teaching, research and service missions of the university and address important problems for our stakeholders globally.” 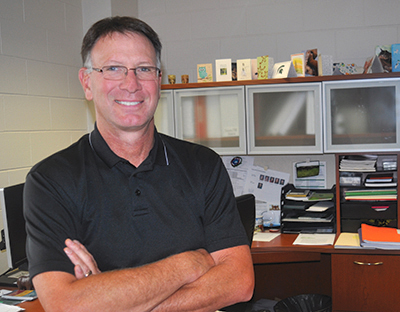