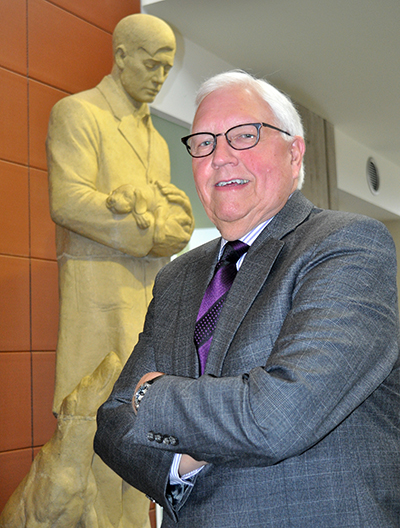 An Honor and Privilege

Dr. Marv Johnson's long-time involvement with the College of Veterinary Medicine began with a simple request.

"I was building our first veterinary practice after returning to the area after ten years in a large small animal veterinary practice in South Bend, Indiana, "Johnson, a 1968 DVM graduate said. “I was asked to present to third and fourth year veterinary students on ‘The Art and Science of Veterinary Medical Practice.’"

At that time and since, Johnson and his veterinary practice(s) were active in referring his clients and patients to the Iowa State Teaching Hospital.

“The faculty and administration were aware of my commitment to Iowa State University and the College of Veterinary Medicine and those commitments morphed into additional volunteer efforts on behalf of the college," Johnson said.

His support of and commitment to the College of Veterinary Medicine and Iowa State University continued as he built the multi-hospital Veterinary Medical Group of Des Moines.

That's quite the understatement. Johnson has been actively involved in the college for a number of years and in a number of ways. He served as president of the college's Veterinary Medical Alumni Association and has been a member of a number of search committees, including the most recent search that resulted in the appointment of Dr. Dan Grooms as the new college dean. He has been awarded the Stange Award, the highest award granted by the College of Veterinary Medicine at Iowa State.

Johnson has also volunteered for the ISU Alumni Association and was awarded the Outstanding Alumnus Award. He is a member of the Board of Governors of the ISU Foundation.

He and his family have been season ticket holders for over 40 years for a variety of Iowa State sports including football, men's and women's basketball and recently women's volleyball and wrestling. He and his family rarely miss a home Cyclone athletic contest.

And along the way he served in a number of veterinary professional organizations at the state and national level. He served on the Small Animal Committee and the Management Committee of the Iowa Veterinary Medical Association. He was the IVMA Veterinarian of the Year in 1992. He has been very active in the American Animal Hospital Association for years and served as President of the AAHA after years on various committees and service on the Board, the only Iowa veterinarian to have had the honor to do so.

He was also a founder along with six other US veterinarians of the National PetCare Centers which later merged into Veterinary Centers of America(VCA) after growing from 16 hospitals to over 80.

He has a unique perspective on his profession having served it in private practice, corporate practice and in organized veterinary medicine.

And he does this for one simple reason. "I care deeply about my profession, Iowa State University and the College of Veterinary Medicine and want to do everything I can to promote and extend the vision and execution of that vision for as long as I can provide value and resources," he said.

Johnson says he considers it a privilege to be both an Iowa State and College of Veterinary Medicine graduate. His own educational experiences and his professional career continue to stimulate him to try to make a difference where ever possible.

In particular Johnson is a huge supporter of the land grant approach to higher education.

"The fact that Iowa State supports and celebrates its land grant mission is one of the reasons why I continue to support my alma mater, " he said.

These days, Johnson is active with the college's "Forever True, For Iowa State" initiative. He is Co-Chair of the Campaign Committee for the College of Veterinary Medicine which gives him a different perspective on the college and the importance of external funding and gives him an "inside and external look" at the dynamics of the challenges of funding from the perspective of the veterinary student and administration.

"The passion of the members of the Campaign Committee to support and extend the mission of the college is palpable," he said. "They all bring their individual success in their own careers to be leveraged as they support and lead the campaign."

Johnson and his wife not only give their time but they have given back financially as long time donors to the college. In the last campaign they were the naming gift for the Dermatology Lab and Suite in the Hixson-Lied Small Animal Hospital and are long time members of Iowa State's Order of the Knoll.