Dr. Sarah Davis (’01) travels a lot in her job as a veterinarian.

As she traverses the North Dakota highways, she tunes in to the radio and listens to audio books. But Davis says she can’t always be listening to something and will turn off and tune out the radio.

That’s how Inside Voices, the new young adult fiction thriller came to be.

“Sometimes I just get sick of hearing to the same music on the radio or I’m not interested in the audio book I’m listening too,” she said, “so I daydream.”

Six years ago her daydream led her to begin formulating a plot for a book. She shared the idea with her family and several drafts later Inside Voices was published by Darkstroke Books in June 2020.

“I had worked out the beginning and end of the book in that first ‘daydream,’” Davis said. “That pushed me to actually begin writing.”

Still it wasn’t easy. She had to do a lot of research to begin writing. There were countless rewrites. Passages would be written on small pieces of paper and Davis’ phone. She sought opinions from several different sources including her local book club and her grandmother. Her mother edited the manuscript so many times Davis says she is surprised she still talks to her.

An editor was hired. Then she submitted the finished manuscript to multiple agents and publishers.

“A couple of years after writing the first draft I trimmed it down because I had written enough material for a trilogy,” Davis said. “I actually gave up three or four times. I would put it away and not try to look at it for a few weeks.

“But I couldn’t stop thinking about it. I knew I was so close so why not finish it.”

Penny Osborn is the main character in Inside Voices. In high school, Penny witnessed a massacre and lost her father the same day. She had seen the events unfold before it happened, in a premonition, but couldn’t prevent it.

Now a college research project has taken Penny to the edge of the Arctic where she has a chance for a new beginning. But that fresh start is plagued by dark and foreboding premonitions that coincide with a rising number of murders in the Alaskan community. Throw in an orphaned polar bear cub and you have the plot for Inside Voices.

“The underlying themes of the book are mental illness and post-traumatic stress disorder and how we cope with certain things,” Davis said.

Inside Voices ultimately was picked up by Darkstroke Books, a small indie publishing firm, because of Davis’ determination. She continued to pitch Inside Voices in between raising a family, farming and raising livestock with her husband and three children in Glenfield, North Dakota, and working her day job as a veterinarian.

After years of writing a long-form story, it was a 280-word pitch on Twitter that landed Davis a publisher. #PitMad is a pitch event where writers tweet a 280-character pitch for their manuscripts. The winning pitch that caught the attention of the company she would soon sign with went… “Just a city girl living in an arctic world, took a midnight run beneath a shining sun. The fresh start for PTSD suffer Penny is overshadowed by a killer preying on young women. She must determine if it is man or beast without losing sanity.”

Darkstroke Books liked the pitch and Inside Voices is available through Amazon. So far the response has been good. Not only have sales been good but she has received five star reviews on Amazon.

“It took a look of work and patience to put the book together,” she said. “Nothing happens overnight, but I knew I had a good idea, a good story to tell, something that anybody can read.”

Then in the summer of 2020, the big moment arrived in the form of the printed copy of Inside Voices at the doorsteps of her Glenfield farm.

This may not be the only time Davis has a book she has authored delivered to her home. She is working on a separate fantasy-themed novel and she has an idea for a sequel to Inside Voices.

“I have lots of ideas, many of which I say are terrible and disregard,” she said.

“But I said I would never move back to North Dakota, never touch a cow again or marry a farmer and I did all of them. So I know I have enough ideas for another book.” 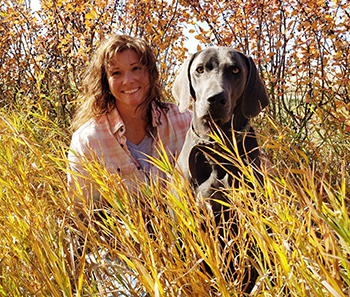 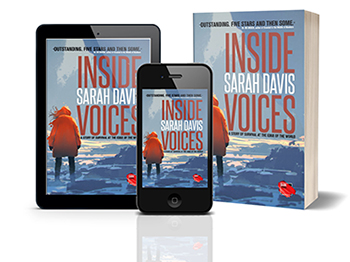