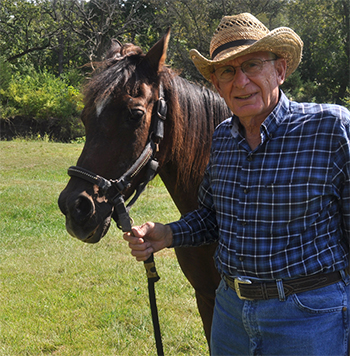 Thomson grew up in rural Clearfield, Iowa, where he followed in his father’s footsteps as a veterinarian.

“Dad was a veterinarian, he graduated from Iowa State in 1938 in the same class as Margaret Sloss,” Thomson said. Thomson’s father practiced first in Gravity, Iowa, before he was drafted in the Army Veterinary Corp during World War II.

“Upon completion of his duty, Dad returned to establish a general practice in Clearfield (Iowa).”

Some of Thomson’s earliest memories are of tagging along with his father on veterinary calls in rural Iowa.

His rural roots continue even in retirement. Thomson and his wife Kay live on an acreage in rural Kelley, just outside of Ames, where he continues to advocate for rural veterinarians. Thomson led the development and implementation of the Veterinary Medicine Loan Repayment Program (VMLRP), a federally funded program offering over $4 million annually in loan forgiveness to veterinarians who commit to serving at least three years in recognized underserved areas.

“In Iowa, the VMLRP has been instrumental in placing veterinarians where they’re needed and enhancing livestock producers’ access to veterinary services,” Thomson said. “The program incentives veterinarians to practice in identified areas of need in exchange for reducing their student debt.”

“Veterinarians bring a lot to rural communities,” he said. “It’s not just treating a sick animal. If you look at a rural community, you will find veterinarians serving on school boards, public health boards, County Fair boards, hospital boards, bank boards and other community service organizations.

“These individuals care about their communities and they are providing their skills and talents to the community in ways more than just practicing veterinary medicine.”

Since retiring from Iowa State, Thomson has provided his skills and talents to other areas as well. He has served on the American Veterinary Medical Association Economic Strategy Committee and currently serves on the advisory board to Lincoln Memorial University’s newly established AVMA-accredited College of Veterinary Medicine. He is presently assisting Texas Tech University in their attempt to create a school of veterinary medicine.

“It’s really exciting to see these programs get developed,” Thomson said. “Veterinary medicine remains a big part of my life.

It is something I won’t have to let go of with our son Dan, (ISU PhD & DVM 2000)  at Kansas State University’s College and Veterinary Medicine, and our granddaughter, Katelyn Annabelle, as a freshman at the University of Missouri’s vet school, keeping me in the loop.”