Sara Funke received the telephone call just before the sheriff showed up at her workplace to give her the news. There had been a car accident. Sara was still making sense of it when she remembered that the family dog was riding in the truck. She cautiously asked the sheriff if he had seen the dog. He had not. Scared and worried, she asked him to go back to crash site to look.

Several people joined the search of the area and surrounding corn fields. After a short time, they found him. “For some reason that I will never know, he was alive,” said Sara.

Crush, the family’s five-year-old German wire-haired pointer, had been riding in the Ford pickup that had been t-boned by a rock truck going down the highway. Crush was thrown from the truck and was found on the opposite side of the highway.

“Crush was in shock and not in good shape,” Sara said. “It was hard to see him, but he was alive.”

The people who found Crush at the scene of the accident rushed him to her local veterinarian who stabilized him, and recommended taking him to Des Moines. Crush was transported to an area hospital where he was diagnosed with a right coxofemoral (hip) luxation. The trauma of the accident caused the femoral head to dislocate from its normal position. Attempts to replace his hip joint in its normal position non-surgically were unsuccessful. Considering his other injuries, they weren’t sure he would make it through the night, but he did, and was taken to Iowa State’s Lloyd Veterinary Medical Center for further treatment.

After stabilizing him, the orthopedic surgery team performed a toggle-pin (synthetic ligament of the head of the femur) stabilization and joint capsule repair. After a couple months, Crush was re-admitted for a second surgery after radiographs confirmed a re-luxation of his right hip joint which resulted in the failure of the toggle-pin implant.

“It was hard to leave him each time,” said Sara. “We live quite a distance away which made visiting him often difficult. It was so comforting to get the evening and morning telephone reports. Often it was the same person, and I thought these people are always there.”

“Since Sara and her family couldn’t visit Crush as often as they wanted, the veterinary students stepped up and gave him the extra TLC and love,” Petrovsky said. Everyone taking care of Crush was so attached to him.”

When Sara learned that Crush’s post-op activities would be severely restricted and he’d be confined to a crate to heal, she bought the biggest crate she could find. “My daughters put all their energy into taking care of him,” said Sara. “My youngest, Olivia would get in the crate with him so he would be less anxious. She was very protective of him.”

Sara’s oldest daughter, Anna, took Crush to most check-ups and continued his physical therapy after the second surgery. “Both girls were a tremendous help in his care,” Sara said.

“Dr. Petrovsky and the staff were always so accommodating,” Sara said. “We knew they cared. We were checking out after a visit, and Dr. Petrovsky had been in surgery. When he heard we were still there, he came running out to see Crush. That meant so much to us.”

All the while that Crush was being cared for by the orthopedic team, they had one thought, “We’ve got to get Crush back home.”

After months of healing, Crush is back to normal. He jumps on the bed, runs with the other two house dogs, and has been found on top of the hot tub outside. “Crush is always happy, has a wonderful temperament, and is such a big goof.”

“From a surgical perspective, this case will always stick with me. I had the opportunity to assist in this surgery for an appreciative owner and great dog,” Petrovsky said. 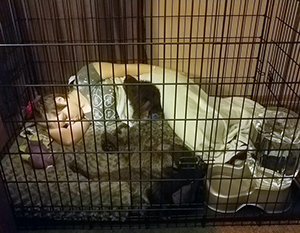 Sara's daughters put all their energy into caring for Crush, even sleeping in the crate with him so he would be less anxious. 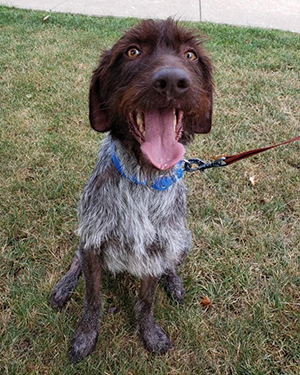 After months of healing, Crush is back to normal.