Moving to a Virtual Anatomy Lab 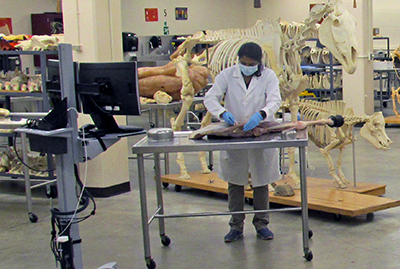 With less than two weeks to prepare, a team of College of Veterinary Medicine professors moved the first-year anatomy to on-line this past spring. Photo: Dr. Eric Rowe

Two weeks. That’s all the time Dr. Eric Rowe and others in the College of Veterinary Medicine had to move the anatomy lab from an in-person course to online when the COVID-19 pandemic forced Iowa State University to move to virtual learning last spring.

“We had just a little under two weeks to come up with a plan and figure out how to execute it,” said Rowe, associate professor of biomedical science.

“Needless to say, we had to be adaptable as we worked through it.”

When Rowe learned he had to quickly move the VM1 course online, he immediately contacted Colorado State University. That institution has a virtual anatomy software which covered the limb of the horse and has the limb osteology for the ruminant.

Next he went online himself, seeking out as many other online resources as he could make available to students.

Unfortunately, the pickings are slim for large animal anatomy.

“We sat down as a teaching team to come up with at least a start of a plan,” Rowe said. “It took us a few days to solidify something and then we worked together as a team to get it done.”

A videotape was made of instructors identifying and describing the anatomy of the ruminant and equine limb on newly dissected material, which the team had to create. Photographs were taken from the specimen for students to label virtually within their groups. In addition to providing new material, the team also took photos of previously learned material for students to study.

“For most of the remainder to the semester we were only about a week ahead of the students,” Rowe said. “In addition to creating study materials, we also increased the number of quizzes we made available to the students with the hopes to keeping them on track, while getting them used to how we were going to conduct the exams in the new virtual environment.”

One of the big issues going online was how to keep the individual dissection groups functional. Students were encouraged to work together online as they identified structures depicted in the photographs provided to them.

Change, practically this late in a course, doesn’t come without a few bumps along the road. But Rowe says the students understood the situation and gave the instructors the benefit of the doubt to finish out the semester.

“Their buy-in to the process was key to our successful completion of the semester,” he said. “They already had a semester and a half of anatomy under their belt so they knew what embalmed tissue looked like. That helped them identify different structures. But on the other hand, we had to do the entire large animal limb and trying to capture videos and photos while still allowing students to get their orientation is difficult.

“The way the semester was going to finish changed virtually overnight,” Rowe continued. “I don’t think any of us, students or faculty, wanted to finish the semester the way we did, but we had no choice and did the best we could.”