END_OF_DOCUMENT_TOKEN_TO_BE_REPLACED

You could just see it in Dr. Rod Bagley’s eyes. He wanted to care for Doree.

At the time, Doree couldn’t stand. She couldn’t walk. She could barely lift her head. She was malnourished.

Yet Bagley saw something in the golden retriever who had spent her four years delivering puppies at a USDA licensed breeder in Iowa. In November 2021, a federal court judge ordered the surrender and removal of more than 500 dogs and puppies from the breeder to the Animal Rescue League of Des Moines.

One of those dogs was Doree. She was also the only dog that required hospitalization at the Lloyd Veterinary Medical Center. Not only was she severely emaciated with almost zero muscle mass, X-rays showed she had multiple fractures to her ribs and spinal vertebrae. She spent most of her next two months in the LVMC’s Canine Rehabilitation Center.

At first, she could only walk with the aid of a sling. She spent parts of every day in a pool swimming and walking on a water treadmill. Day by day, she slowly worked her way back to health.

One of the veterinarians who cared for Doree was Bagley, a professor of veterinary clinical sciences; a neurologist by training who supports the canine rehabilitation service. “When animals can’t get up, the natural thinking is that they have a neurology problem,” Bagley said. “But that wasn’t Doree’s problem. She had the mechanics to walk, but either never learned how to do so, or didn’t feel that she could.

From the first day he saw Doree, Bagley began considering adopting her or at the very least, becoming a foster parent to the dog. But as the weeks passed by, he decided Doree needed the support in a home environment but under a watchful eye.

“First of all, I wanted to make sure we (Bagley and his wife Lynn) could take care of Doree’s needs,” he said, “and I realized that if we did take her home she would probably become ‘foster fail’ and we would eventually adopt her.”

Doree went to Bagley’s home out in the country just before Christmas Day. The family has several cats and a great dog Cooper, who Bagley describes as Doree’s “service dog.”

Since her arrival at the Bagley homestead, Doree has made significant progress. On December 23, Bagley had to carry her in and out of the house. Next, she learned to stand on her front legs. Four days later she would walk about 20 feet before stopping.

New Years’ Day she squatted to urinate for the first time. On January 10, she began going down two outside stairs. By January 14 she was doing more dog things – barking, wagging her tail and eating her meals.

“She continued to get stronger every day,” Bagley said. “Physically she was able to start doing normal dog stuff.”

On February 13, Doree was starting to run a little following with her playmate Cooper. A month later she was rolling on her back outside like her new brother.

Today Doree is close to 60 pounds and has developed her personality. She still is timid around everyone, but is more comfortable around the Bagley home. She tends to sit up close to walls and furniture as though she doesn’t want anything sneaking up behind her. She’s indifferent to the family’s cats but she has learned to walk a flight of stairs to sleep in the master bedroom.

“I really think we were the right ‘space’ for Doree,” Bagley said. “We have the space, time and resources to help care for her. Doree needed someone who could pay attention to her and her health issues. I knew based on my experiences I could do that. “In the end, there really wasn’t a question if Doree was going to come home with me. I didn’t really think about it. It was just going to happen.” 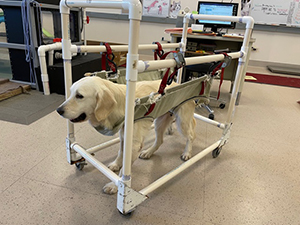 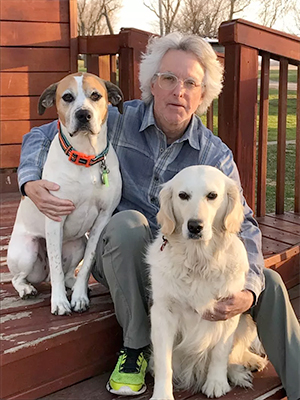 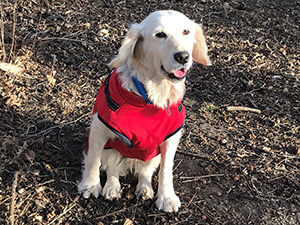