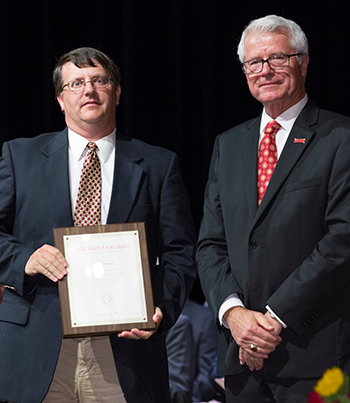 Dr. Paul Plummer and Interim President Benjamin Allen
A Lot of Balls Up in the Air

Dr. Paul Plummer is a man on the go – both at home and in his professional life as an associate professor of veterinary diagnostic and production animal medicine.

“I’m not someone that you will find sitting on the couch doing nothing,” he says. “I tend to juggle a lot of different things.”

“Tend” is an understatement.

On a personal level, Plummer is the father of four children whom his wife and himself homeschool. The family breed and milk Toggenburgs Dairy Goats. They are the owners of three Kangal Livestock Protection dogs and several cats and have previously raised captive White-Tail Deer.

“I have a lot of balls up in the air,” Plummer said, “but to me that seems normal."

“Some people may see this as a pretty fast-paced lifestyle. We do have to milk the goats morning and night but my kids work along side me – we do this as a family – and it allows us to have family time together.”

Plummer’s career in the College of Veterinary Medicine is just as fast-paced with again “a lot of balls up in the air.”

“There are two paths a researcher can gravitate to,” Plummer says. “You can either have a single, real focus on a subject or diversify your research areas.”

Based on Plummer’s personal life, you can image which route he has chosen.

While Plummer’s personality drives him to be diversified in his research activities, he is more pragmatic about this choice.

“Now-a-days with funding the way it is, it would be difficult for a beginning researcher to put all of their eggs in one basket,” he said. “You would be competing against researchers who may have been in that field for decades and it would be very difficult to get funding.”

Instead Plummer submits proposals in a lot of different areas. And so far he has been successful in obtaining both industry and federal funding for his projects. He is a board certified internal medicine specialist and has not only a DVM but a PhD in veterinary microbiology. Again, a lot of eggs in one basket.

“I love the diversity afforded by bridging the gap between clinical medicine and biomedical research,” he said. “I get to work with a variety of animal species, infectious diseases and research collaborators.”

These projects keep Plummer on the go with funding from both USDA and USAID. He is also collaborating with other Iowa State researchers on grants from NIH and has recently submitted proposals to the Department of Defense and NSF. He is a frequent award winner both at the college and university level. He will be recognized this fall as the university's sole recipient of the ISU Award for Early Achievement in Research.

And yet these projects aren’t enough for Plummer.

“There are so many different things I would love to study,” he said. “I imagine I could do another six or seven projects if I had the funding.”

Despite the diverse research projects, Plummer doesn’t worry about spreading himself too thin.

“My personality is such that I enjoy diversity. I always have questions I want answered that I can’t image not seeking answers for.”