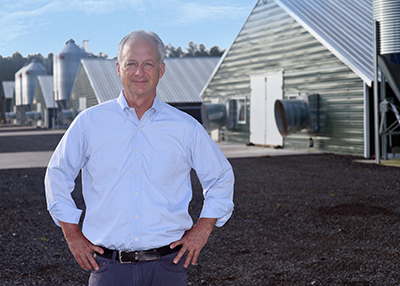 Early in his tenure with Perdue Farms Dr. Bruce Stewart-Brown (’85) said something radical for his industry.

“We should work on having ‘happy chickens,’” Brown recalls saying at a company meeting.

To say the least, that comment was looked upon with a great deal of skepticism. Colleagues challenged: "What does that even mean? Changing the way we raise chickens will take a long time and cost a lot of money and why work on moving towards a system that allows a chicken to 'be a chicken?'"

But he persisted and soon won over the skeptics because as he puts it… “a happy chicken is a more efficient chicken that produces a better quality product.”

Truly radical thinking for Perdue Farms, one of the nation’s major chicken, turkey and pork processing companies. Back when Stewart-Brown first started talking about “happy chickens,” every chicken at Perdue Farms received antibiotics for disease prevention and for growth.

Today only about two percent of Perdue’s birds might be given antibiotics in any given year and only for therapeutic reasons.

Perdue has instituted other changes under Stewart-Brown’s watch. The company now raises one million organic chickens weekly. Fifteen years ago that number stood at zero. Housing for the birds has also improved.

“Bruce is a visionary who is able to see where we need to go to be successful, especially with our poultry growing practices,” he said.

And the poultry industry has taken notice. Antibiotic usage industry-wide has been dramatically reduced to the point where now approximately half of the industry no longer uses them.

“The consumer perceives the use of antibiotics as the industry being lazy,” Stewart-Brown said, “that we were raising animals in such a way to cover up poor management.

“We weren’t the first company to forgo using growth promotion and prevention type antibiotics but we were the first last-scale production company to do so. We did it and we did it the right way. Our success in reducing our antibiotic use is in large part due to our changes in husbandry and general animal care."

The consumer is always in the forefront of Stewart-Brown’s mind. Perdue is about to celebrate its 100th year in business and food business companies don't get to that point in their history without paying attention to their loyal consumers. He says Perdue receives over 3000 communications from customers a month – everything from general questions to complaints.

Each question is answered.

“Twenty years ago we received a lot of questions about our use of antibiotics and we didn’t like the answers we were giving,” Stewart-Brown said. “That’s when this project really started.

“The big secret for us was to work on this over a period of time, developing a long-term vision that allowed us to do this one step at a time.”

The initial skepticism made it difficult for Perdue to achieve its ultimate goals.

“Several people tried to kill this project along the way, but Jim Perdue continually backed us up, encouraging us to continue to move the project forward.

“I was lucky to get the right job at the right time. It’s still unbelievable to me that the company thought my ideas we worth listening to.”