END_OF_DOCUMENT_TOKEN_TO_BE_REPLACED

Preparing for an Outbreak

For a few hours, Nick Benge and Calie Burgart were no longer fourth-year veterinary students at Iowa State University.

The two were among 41 participants in the exercise which simulated an outbreak of foot-and-mouth disease at a packing plant near the town of “Hopeless.” Attendees played the roles of state and federal officials, sale barn owners, dairy, swine and beef producers, law enforcement, and various other roles. The exercise was held in the Veterinary Field Services’ garage.

“Each individual was assigned a role to navigate these entities through the challenges of a foreign animal disease,” said. Dr. Justin Brown, assistant teaching professor of veterinary diagnostic and production animal medicine. “This was the culminating activity for the swine emerging diseases diagnosis and management rotation for fourth-year students.”

Benge and Burgart were part of that rotation and the table top exercise. Benge played a sow farm manager.

“I had to work through how a foreign animal disease would affect day-to-day operations on the farm,” he said. “It helped me better understand how each person the supply chain would be affected. It also gave me a better understanding of how it may affect the community as a whole and their response.

“Getting to interact with government officials who would be in charge of a response and what their current plan of action would be was very valuable.”

One of those community members was portrayed by Burgart. She played a feed mill manager who had to find a way to maintain business continuity but also take the correct and necessary precautions to protect other sites from contracting the disease during the outbreak.

“This experience opened my eyes to the many moving parts that will be happening during a FAD outbreak,” she said. “It reinforced the importance of trying to plan ahead as much as possible.”

And although the Benge and Burgart didn’t play veterinarians in the simulation, they both said the experience would help them in their careers.

“I will be doing primarily food animal work after I graduate, so having exposure and thinking through all the little details that come up during these exercises will help me to be more organized and have a better idea of whom to contact with different questions if a FAD were to happen in the herd I am responsible for,” Burgart said.

The table top exercise was the cumulation of a day-long set of activities which included morning lectures. In addition to Iowa State veterinary students, graduate students and faculty, participants included swine production veterinarians, production staff, State of Iowa and USDA officials, and staff members of the Iowa Pork Producers Association and the National Pork Board. 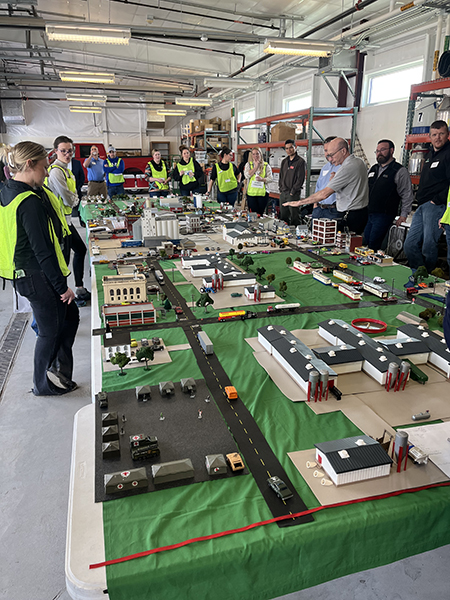