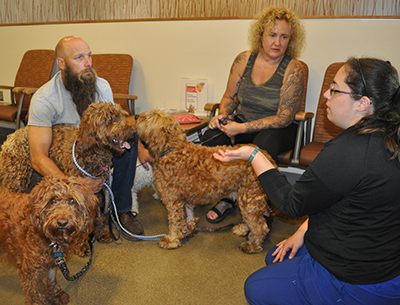 It’s unimaginable to come home and find your house is on fire.

It’s unthinkable knowing your four dogs are inside.

That was the realization that hit Ryan Ewing and April Barden when they came back to their Roland home last Sunday night after just being gone for 20 minutes.

“We realized something was wrong right away when we could smell the smoke,” Ewing said. “When we opened up the door we could see there were flames in the kitchen.”

Ewing and Barden frantically searched their home for their four dogs while also attempting to put out the fire. While it was probably only a five-minute search, it seemed like an eternity for the Roland couple.

All four seemed fine but after the fire department and paramedics had arrived, Ewing and Barden realized one of the dogs was suffering some aftereffects from the fire and smoke.

“Cotton started coughing and laying down and we couldn’t wake him up,” Barden said. “We rushed all four here (Hixson-Lied Small Animal Hospital in the College of Veterinary Medicine).”

Dr. Chelsea Zorn, a small animal emergency and critical care resident, said all four dogs were suffering from smoke inhalation and carbon monoxide poisoning. The ICU team at Iowa State went to work and were able to quickly treat all four dogs.

"Smoke inhalation has multiple concerns," Zorn said. "It can cause upper and lower airway damage secondary to heat and smoke, burns to the skin and inflammation of the eyes, and development of neurologic signs.

Luna went home early Monday morning, while Cotton and LeeRoy were discharged that same day. Lady Bird was kept overnight and was released Tuesday, much to the delight of the other dogs who greeted her in the hospital’s lobby.

“At first we didn’t realize how serious this was and the side effects of the smoke. I’m glad we decided to come here as quickly as we did,” Barden said.