On the Road to Recovery

Layla has left the building.

After more than two months in the Intensive Care Unit in Iowa State University’s Hixson-Lied Small Animal, the three-year-old FS Pitbull has been discharged and is spending her days at home in the Quad Cities area.

It’s a monumental leap in her care, one that many didn’t think would happen when she was admitted to the ICU with massive burns over 50% of her body. “When Layla was first admitted her prognosis was guarded at best,” said Dr. April Blong, criticalist with the ICU. “Initially we thought we would have to amputate a leg and her tail.”

When Layla was discharged last Friday (July 5), she left with that leg and her tail. Now just 10% of her body remains injured.

“Literally every time we change her bandages we see improvement in her wounds,” Blong said. “Eventually it will all heal.” “Sweet Layla” as she is known to the Hixson-Lied staff has undergrown several major surgeries and countless procedures. It would take up to four staff members close to an hour to initially bandage her wounds, an procedure that occurred every couple of days.

Even though she is heading home, Layla will have to return to the hospital twice a week for new bandages and checkups. Although she wants to be a normal dog again, Layla must be kept calm until her injuries are fully healed.

“Layla such a social dog that has been a challenge at times,” Blong said. “We just want to keep her calm and quiet so that she can continue to heal.” Layla’s treatment hasn’t come without a cost. Her owners have set up a Go Fund Me account and have received donations from numerous individuals, organizations and companies. Firms have also donated experimental items to help with her skin graft operations.

This case has served to not only endear the Hixson-Lied staff to Layla but has offered a once-in-a-lifetime learning experience, for students, faculty and staff alike. “This has been a very challenging and unusual case,” said Dr. Megan Mickelson, Hixson-Lied surgeon, who has served as the primary surgeon in Layla’s case, “but the owners have been very cooperative and open to our care suggestions.”

Cassandra Billingsley, Layla’s owner, was on hand last Friday to take Layla home. Billingsley and her family have traveled to Ames several times over the past 2 ½ months to visit her dog. She was excited and anxious at the same time about Layla coming home.

“It’s exciting but very stressful,” she said. “I’m hopeful though that she will be able to heal faster at home.” Layla’s departure from the ICU is bittersweet for Blong, Mickelson and the numerous other staff members who have cared for the dog. The team held a party for Layla before Billingsley’s arrival. The party was complete with congratulations balloons, party hats and a cake. “We couldn’t have asked for a better team to take care of Layla,” Billingsley said. “She is so loved here."

Members of Layla’s medical team include: 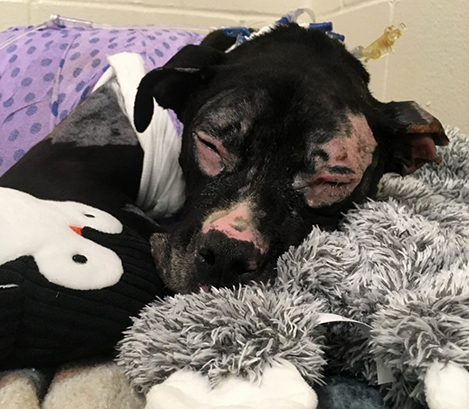