Veterinary students Kelsey Deaver and Laura Pelzel served as interns this past summer in the College of Veterinary Medicine’s Dean’s Office. The pair visited with veterinary clinics across the state while developing a report on the shortage of veterinarians in rural Iowa.

“During my tenure I received many phone calls from food animal veterinarians who all told me a familiar story,” Schmitt wrote in an opinion piece published this past year in the Des Moines Register. “Their practices were having trouble hiring – no matter their recruitment efforts, they simply couldn’t find veterinarians who wanted to work with food animals in rural areas.”

Over the past decades, rural populations have declined not only in Iowa but throughout the United States. It has become harder and harder for communities to attract professional workers who will not only not relocate but won’t stay for the long haul.

Veterinary medicine is at the forefront of this crisis.

“In many rural areas, there simply aren’t enough food animal veterinarians, leaving livestock without timely access to preventive care and vulnerable to dangerous diseases that can wipe out herds and flocks,” Schmitt wrote.

“Our idea was to gather information that we could use to help understand why a shortage of veterinarians in rural Iowa is developing,” Grooms said, “and then use that information to start attacking the problem.”

Deaver and Pelzel contacted veterinary clinics across the state. The trio made visits to various clinics to speak with veterinarians to find out what the issues were. Surveys were conducted with current Iowa State veterinary students to determine what their career aspirations were.

What they discovered mirrored Schmitt’s comments. In Iowa over 60% of the veterinary clinics hiring are in communities with a population of less than 10,000. By contrast clinics in cities over 100,000 make up only 10% of the hiring clinics.

A vast majority of the current DVM student population at Iowa State grew up in communities of less than 50,000 people which would lead to the assumption that they would go back to rural communities.

So why the disconnect?

“There are huge myths on both sides,” Deaver, a third-year student from Las Vegas, said. “What practitioners think students want and what students think rural clinics are like aren’t necessarily true.”

“Students don’t necessarily think of rural practices when they start their job search,” said Pelzel, a second-year student from rural Minnesota. “They assume the clinics don’t have the facilities or in-house equipment they see in the larger, big city clinics.”

In their survey of current Iowa State veterinary students, Deaver and Pelzel found the geographical location and cost of living were not high on students’ priority lists. Instead, mentorship, salary and type of practice were the top priorities.

With an average student debt load of $142,000, Iowa State CVM students may not consider a rural practice because they think they won’t be able to make a salary sufficient to pay back their student loans.

But Deaver and Pelzel found out that almost 80% of the veterinary clinics in the state are offering a starting salary of at least $70,000 a year. And a 2019 AVMA survey of graduating veterinary students says Iowa State students had an average starting salary of $79,145, well above the national average of $70,128.

“Many students’ perceptions are that they will make significantly less in rural practices,” Pelzel said.

Low salaries are just one of the realities the pair learned about. The potential lack of mentorship opportunities, outdated or non-existent equipment, job opportunities for a significant other or spouse were all concerns mentioned by current veterinary students.

A myth also exists that rural practice just means large animals and that small animal medicine doesn’t happen in these communities Deaver and Pelzel’s research showed that 46% of the clinics hiring in Iowa were small animal exclusive.

There’s also the issue of wanting to try something different.

“A lot of rural students we spoke to, especially those from Iowa, want to try something different,” Deaver said. “They have the idea that they want to get out and see the world now.”

A national study has reported that 35% of the respondents have left rural veterinary practices. They cited several issues including salary, practice atmosphere and family concerns but the top two issues were time off and emergency duties.

Long hours was also an issue Deaver and Pelzel discovered in their study.

“Some clinics claim students don’t want to be on-call or work on weekends,” Deaver said, “but the students going into the workforce we spoke with were OK with it within reason.”

The number of hours recent graduates are working has decreased in recent years, which may be contributing to the shortage. In a survey, almost half of respondents from the class of 2012 said they worked at least 50 hours a week. That number dropped to less than 30% of the class of 2017 graduates.

“Students are looking for opportunities with good work-life balance,” Grooms said. “They are willing to work hard, but also value their time off.”

“This federal program is experiencing tremendous success in filling rural veterinary shortages across the country,” he said. “In the last four years alone, this program has supported 20 veterinarians in high-need areas in Iowa.”

Deaver and Pelzel says clinics should be more aggressive in seeking out new graduates. Many rural clinics don’t have a dedicated website, which is the first place today’s students go to find out about the clinic as well as the community. Clinics may also have to develop creative ways to recruit candidates to their practice.

Clinics should also sell small town life. Dr. John Thomson (DVM ’67), former dean of the College of Veterinary Medicine, is passionate about rural veterinary practices and what a veterinarian adds to their community.

“Veterinarians bring a lot to rural communities,” he said. “It’s not just treating a sick animal. If you look at a rural community, you will find veterinarians serving on school boards, public health boards, county fair boards, hospital boards, bank boards and other community service organizations

“These individuals care about their communities and they are providing their skills and talents to the community in ways more than just practicing veterinary medicine.”

Clinics can also learn from their peers including Dr. Erica Koller (DVM ’07), who activity promotes the idea of practicing in underserved areas such as her hometown of Edgemont, South Dakota. Her passion for rural veterinary medicine has evolved into an externship program for veterinary students to experience rural practice settings.

“I felt we were in a really good place to start offering externships,” she said. “My partners and I were younger veterinarians. We had good equipment but we realized there wasn’t a lot of interest in new graduates going out into rural settings.”

Students spend their externship with Koller and her partners almost 24/7. The students stay with the veterinarians’ families by design and necessity since Edgemont’s population is only 900. The externs attend the town’s pot luck dinners and go to local high school football games.

“We want them to see the full lifestyle, how we involve our families and how we prioritize our work-life satisfaction,” Koller says.

Spending the summer engrossed in finding out more about rural practices and their challenges has also affected Deaver and Pelzel.

“Rural medicine, it’s what I know,” Pelzel said. “I like small towns and I want to be a part of the community, become invested in the community and raise a family there.”

Even the big city student and other like her, are now interested in rural veterinary medicine. A recent study showed that 60% of rural practice veterinarians were raised in an urban background.

“Prior to this internship I wanted to go to a larger city to practice,” Deaver said. “Now I might go into rural practice.” 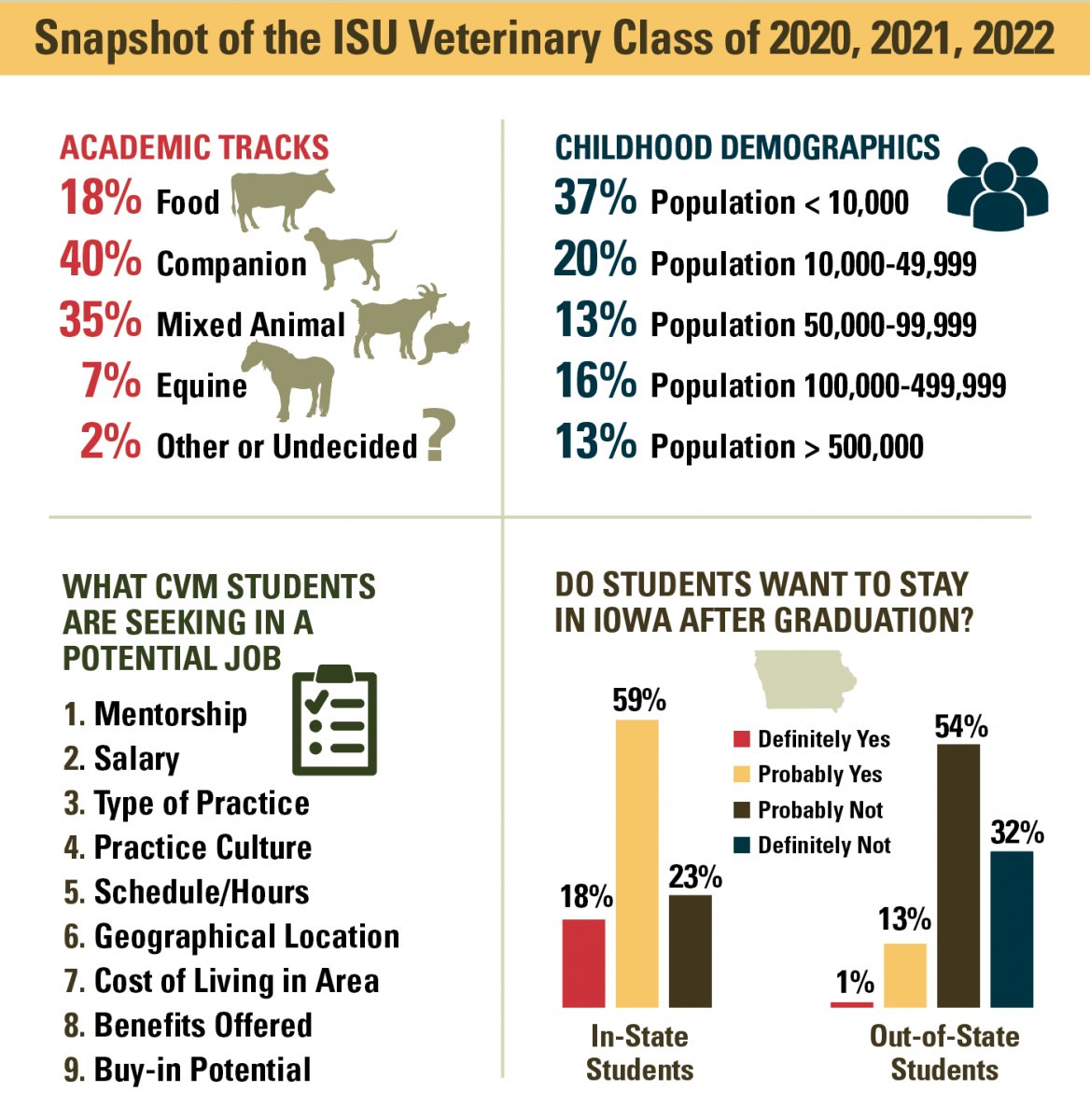