Kenyans bring their dogs to be vaccinated for rabies during one of Drs. Brian Darrow and Ron Tapper's first visits to the nation.

“It’s pretty amazing to think that two veterinarians with their roots in Anamosa and Iowa State University would travel to Kenya and help improve the lives of the
African people.” 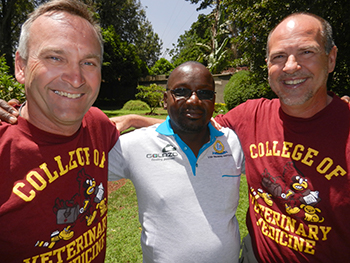 Dr. Brian Darrow never knew Sharon. Neither did Dr. Ron Tapper. Yet the two College of Veterinary Medicine graduates have dedicated a good chunk of their lives to a foundation named in honor of Sharon with the hopes that what happened to her, won’t happen to another eight-year-old girl. Or anyone else for that matter.

Darrow (DVM ’83) and Tapper (DVM ’84) are the co-founders of the Sharon Live on Foundation, a rabies vaccination program focusing on dogs, cats and donkeys in the Nandi Central District of Kenya. The program was a response to Sharon’s death due to a bite from a rabid dog just one day before Christmas in 2003.

As previously mentioned, neither Darrow or Tapper knew Sharon. They didn’t know her parents yet there is a strong Iowa State connection.

Darrow was in attendance at the reunion and was moved by the story. “An 8-year-old girl shouldn’t die from rabies, no matter where she lives,” he said.

The Anamosa, Iowa, veterinarian was aware of a program offered by Merck Animal Health where if one dose of the Merck rabies vaccine was purchased, another would be sent to Africa.

The Sharon Live on Foundation was born that day.

“We regularly talk about veterinary issues or where our next adventure will take us,” Tapper said. “When Brian first expressed an interest in trying to do something with rabies control in Kenya, I was in – no hesitation – no reservation.

“My only question was ‘what do you need me to do?’”

“How many people have friends that you can call and they immediately agree to go to Kenya with you and start vaccinating dogs,” Darrow asks?

The two worked with Merck, which donated tens of thousands of dosages of the rabies vaccine and helped the logistics of getting the two to Kenya. Research shows if a community can vaccinate 75% of the domestic animals, it will reduce the human exposure to rabies by 90%.

That’s significant because there are annually 2,000 deaths from rabies in Kenya and 95% of deaths caused by rabies are due to dog bites. Worldwide, it is estimated between 50,000 and 70,000 people die each year from rabies.

“Merck has been fantastic with their support,” Tapper said. “If it was not for them, our project would have struggled.”

Even then, the experience was surreal to Darrow and Tapper. They describe seeing a Kenya few outsiders ever get to see. They lived amongst the locals and experienced day-to-day life in the Kenyan countryside.

“We really were not sure what to expect,” Tapper said. “It turned out fantastic.”

The Iowa contingent was greeted to a grand opening ceremony at the village where the project was to be conducted. Everyone in the village and surrounding community attended with speakers, singers and the children.

“We sat for five hours at this celebration,” Darrow said. “It was surreal to have a parade waiting for us.”

On vaccine days, they would travel down barely passible roads to rudimentary cattle corrals that seemingly appeared out of nowhere.

“Slowly small groups of people would come walking from all different directions with dogs on leashes and cats in bags,” Tapper said. “We even did a few donkeys along the way.”

The immediate impact that Darrow and Tapper made through the Sharon Live on Foundation was significant. On their first trip, the duo and their team vaccinated around 18,000 animals. That first trip was a total leap of blind faith.

By the time they returned to Kenya for a second trip, the local government had embraced the foundation’s mission and had expanded the program to the entire county with more than 90,000 animals vaccinated.

The day-to-day operations were now being supervised locally, allowing Darrow and Tapper to meet with national government officials to discuss plans to duplicate the program throughout Kenya. To date, more than 400,000 doses have been donated to the Sharon Live on Foundation and have been used to improve the health and lives of Kenyans throughout the country.

Darrow has put his heart and soul into the Sharon Live on Foundation, traveling to Kenya four separate times.

“I am proud of Brian for what he had the vision to start,” Tapper said. “I am proud of myself for having blind faith in my friend to say ‘I’m in’ before I really had any idea of what we were going to do.

“It’s pretty amazing to think that two veterinarians with their roots in Anamosa and Iowa State University would travel to Kenya and help improve the lives of the African people.”

Dr. MacKenzie Paulson is a 2011 Iowa State DVM graduate and works with Darrow at the Anamosa Veterinary Clinic. She has first-hand knowledge of how dedicated Darrow is to the Sharon Live on Foundation.

“Dr. Darrow has put a lot of his personal time, energy and emotion into his Kenyan Projects,” she said. “Every time I’ve seen him speak about Sharon, the wavering in his voice and the tears in his eyes tell you how much he cares about the people of Kenya.

“He would be in the middle of surgery and his phone would ring and a big smile would light up his face as he proudly stated, ‘Kenya is calling!’ It was through his dedication that he was able to get the Kenyans to think big and to employ tactics to make Sharon’s Project self-sustainable.”

Darrow on the other hand gives all the credit to others.

“What I have received back is much greater than anything I’ve given,” he said. “This has all happened not because of me, but in spite of me.

“If at least one life has been saved because of our project, then we’ve made a difference.”