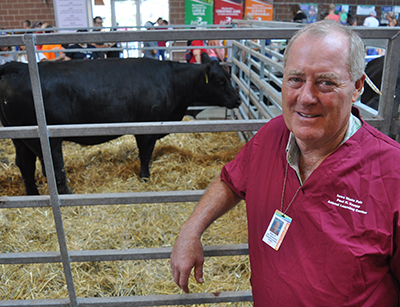 When the calendar turns to August, family, friends and neighbors know where to find Dr. Gene Hoy.

For the past 11 Augusts, Hoy has directed the activities at the Animal Learning Center at the Iowa State Fair. The popular exhibits in the building feature live births of pigs, cows, sheep, goats – you name a farm animal outside of a horse and chances are you can see a baby during your visit to the fair.

This year, 11 is the magic number for Hoy, a 1969 Iowa State DVM graduate. Not only was it his 11th year at the Animal Learning Center, but he annually spends 11 days at the fair.

“I’m here from the Monday before the fair starts until the Monday afterwards,” he said.

Hoy began working at the fair while he was still practicing at the Richland (Iowa) Veterinary Clinic, a business he owned for 43 years. Although he has been retired for the past seven years, Hoy enjoys the atmosphere of the Animal Learning Center, which is the most visited exhibit at the Iowa State Fair.

The exhibit averages 600 visitors every hour. Hoy says most of the visitors are from urban or suburban locales, although many are just a generation or two removed from the farm.

“As long as we have babies to look at people are happy,” Hoy says, “although sometimes we have 250 people watching a live birth.

“I love seeing the little faces lined up watching our cows have a calf. That actually happened on the first day of this year’s fair.”

During a typical year, Hoy says the Animal Learning Center will see the birth of 10 cows, 100 pigs, 10 sheep, 15 goats and countless chickens, turkeys and ducks.

“Our ultimate goal is to have a ‘cycle’ – a cow, hog, goat and lamb births all on the same day,” he said.

Each year, Hoy and his staff encounters problems with a live birth. He has had to pull calves in the past but he says the goal is to show visitors what the birthing experience is really like.

“We don’t hide what we’re doing here,” he said, “good or bad, we’re going to show people happens with livestock births and for them to realize they can be problems.”

Hoy oversees a large volunteer staff of six veterinarians, 20 vet students and a group of FFA students from Southeast Polk High School in the Des Moines suburbs. These high school students are the “backbone of the operation” Hoy says. They take care of the cows all year long, work-set-up and maintenance throughout the fair.

Which leaves Hoy time for other things.

“I really enjoy talking with people who come to the exhibit,” he said, “although it can be difficult at times to hold a conversation with all the folks who are here.”

No matter how crowded the Animal Health Center becomes, Hoy will find time to speak to a visitor.

And every August, Hoy sees more than just fairgoers. It’s a place to renew all friendships and host family members.

“It’s great to see old friends,” he says. “Every year an old college friend will drop by the exhibit to say hello, some of whom I haven’t seen for 50 years.

“It’s also a way for me to give back to the livestock industry that has provided for my living my whole life.”