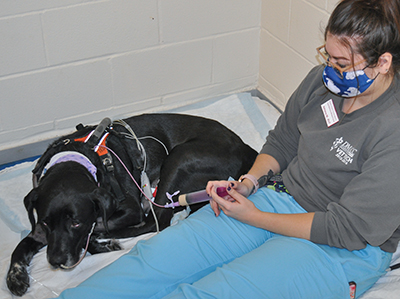 When Black Girl arrived at the Hixson-Lied Small Animal Hospital last weekend, her condition was dire.

The Labrador mix had been in labor for 24 hours. She was unable to stand and a puppy was stuck in her birth canal.

“Her breathing was labored and her belly was painful,” said Dr. April Blong, assistant professor of veterinary clinical sciences. “She had free fluid in her abdomen which we were concerned about being infected or septic.”

Black Girl or “Ruthie” as the emergency and critical care team calls her, was rushed into surgery where she delivered 21 puppies, about half of which were still-born. The remainder of the litter died shortly after birth.

The emergency and critical care team focused their care on Ruthie. During the first 24 hours of her stay she received four units of fresh frozen plasma, along with four units of red blood cells. She also required supplemental oxygen, heart rate/blood pressure supportive medications, and a temporary feeding tube.

She was intravenously given antibiotics, fluids, electrolytes and amino acids. It was an aggressive treatment.

“She would not have survived without veterinary treatment, without the aggressive and intensive care she received,” Blong said. “It really took the whole team to treat Ruthie.”

Ruthie has responded magnificently to her treatment. Blong says she is eating more and more on her own with each passing day. She is also on all oral medications.

Ruthie was brought into the Hixson-Lied Small Animal Hospital by the Boone Area Humane Society. The organization has been fundraising to help cover the cost of Ruthie’s care.

“Blood products (red blood cells and plasma) are expensive, along with the amount of care she has required,” Blong said. “The total cost of her hospitalization is much lower than what we originally estimated because of how well and how quickly she has recovered.

“We are very thankful for everyone who donated for her care and thankful for the Boone Area Humane Society for taking her in and letting us provide the care Ruthie deserved.”

Blong anticipates that Ruthie’s quick recovery will allow her to be released in the next few days. The emergency and critical care team will be happy to see her go, but sad nonetheless.

“Through all her treatments, she has been nothing but the best patient,” Blong said. “Now that she is feeling better we are getting to see her true personality more and we have all grown to love her dearly.

“She has responded beautifully to treatment and we are so happy with Ruthie’s outcome.”