END_OF_DOCUMENT_TOKEN_TO_BE_REPLACED

A recent such case came about when a filly was diagnosed soon after birth with severe neonatal maladjustment syndrome (NMS). As part of this disease process, the young horse was suffering from severe seizures, hypoventilation and was also presumed sepsis.

“As part of this syndrome, her brain was not telling her to breath frequently enough which was resulting in respiratory acidosis or a build-up of too much CO2 in her blood stream,” said Dr. Jamie Kopper, assistant professor of large animal emergency and critical care.

The best solution to the filly’s issues required collaboration and cooperation across both the Hixson-Lied Small Animal Hospital and the Large Animal Hospital.

“This type of procedure requires not only a dedicated team of caregivers but a dedicated owner because there are a lot of unknowns, a financial commitment and the outcome is often hard to predict for a while.”

The procedure the foal required was a mechanical ventilation. Without the procedure she probably would have died.

For 36 hours, the filly remained in the small animal ICU. Her condition improved remarkably over the first 24 hours, allowing clinicians to wean her off of the ventilator when her brain had adjusted to extra-uterine life, allowing her to breath appropriately.

“We removed the breathing tube about 36 hours after she initially went on the ventilator,” said Dr. April Blong, clinical assistant professor in the small animal emergency and critical care unit. “She remained in our ICU several more hours to ensure her breathing muscles would not get tired and she would have to go back onto the ventilator.”

Blong said the procedure was similar to what the small animal clinicians would use on a large dog. But there were other issues the veterinarians had to take into consideration.

Because the filly was taken from the mare early in her life, the two did not have the opportunity to bond immediately after birth which can sometimes lead to rejection.

“Re-bonding sick foals with mares is not uncommon,” Kopper said. “We kept blankets that the foal had been on in the ICU with the mare so she could still smell her. When she returned back to the large animal ICU, we slowly began reintroducing them with short supervised visits until the mare proved to us that she wanted the foal back.”

Mare and filly are now back together and have been discharged from the hospital. It was a critical 36 hours for all involved but Kopper says the prognosis is excellent now.

“She should go on to live a normal foal life,” she said. 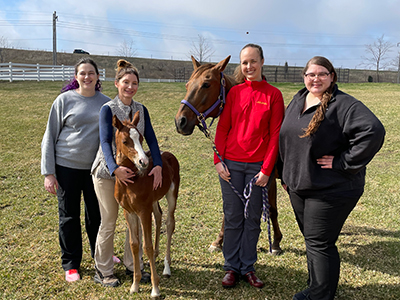 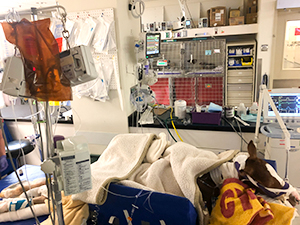 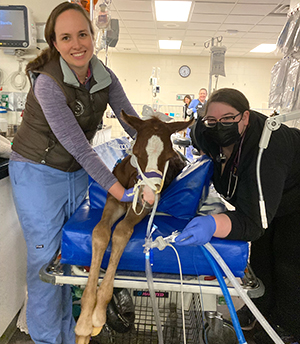 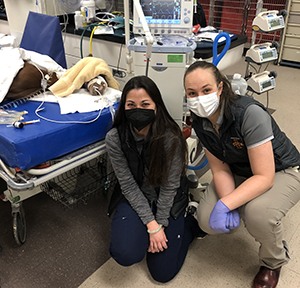