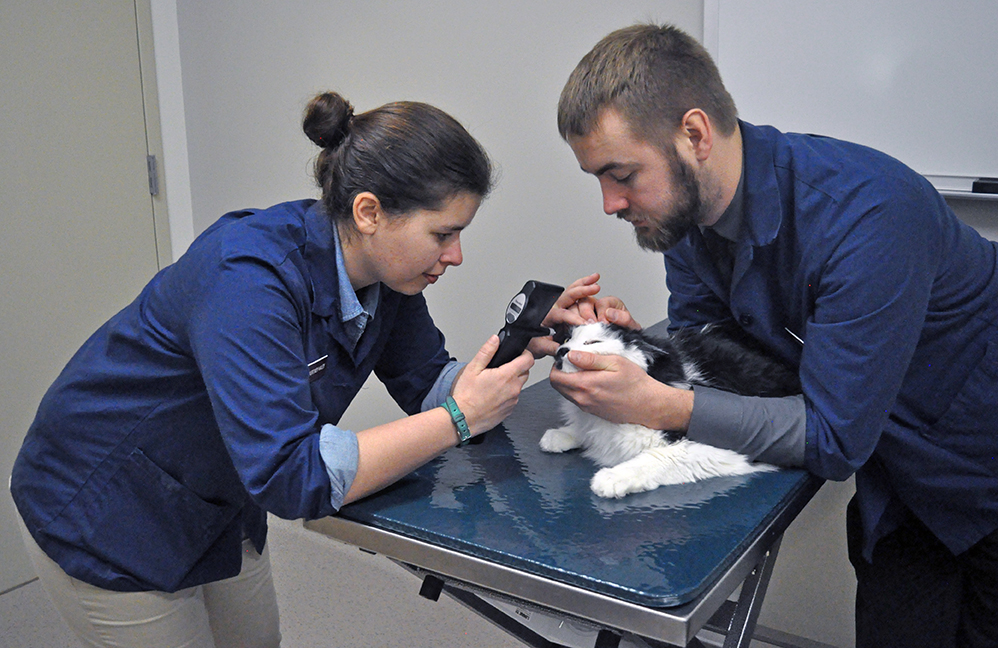 8:10 a.m.: Rounds start. Dr. Braidee Foote, ophthalmology resident, runs rounds today. This morning’s topic is glaucoma. She goes through a discussion on the eye disease including its causes, treatments and other issues glaucoma causes in dogs, cats and horses.

9 a.m.: Cases begin. Ten patients are scheduled to be seen today including rechecks and new patients. Yesterday, the five fourth-year students on the ophthalmology rotation called today’s clients to confirm their appointments. 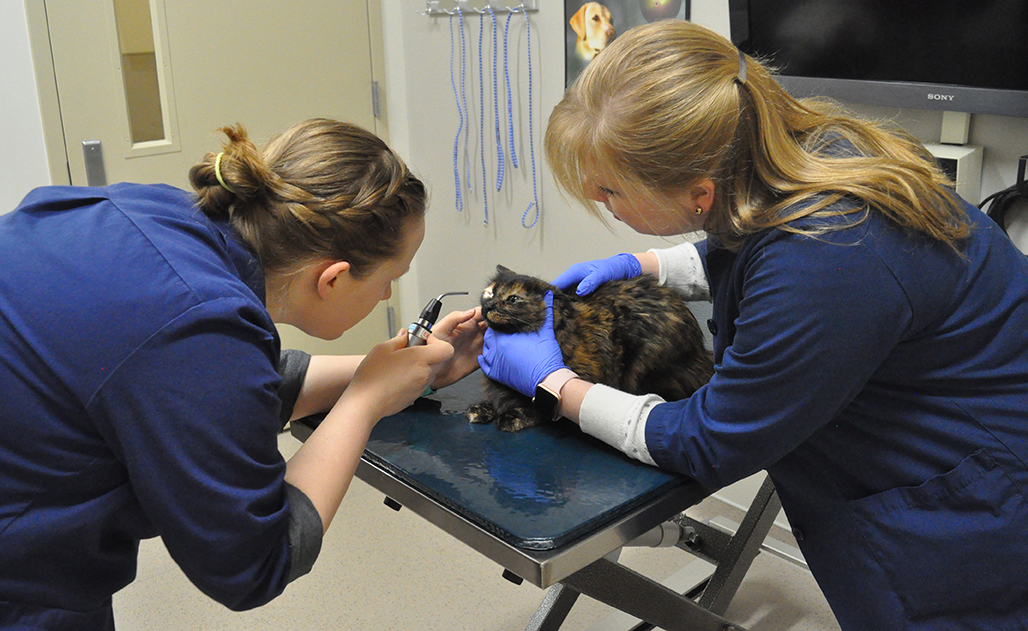 9:20 a.m.: The call goes over the intercom, announcing the next patient. Five minutes later fourth-year student Wendy Thill is going over ChaCha’s recent history with the owner. The cat is in for a recheck for a chronic ulcer in the right eye and an inflamed cornea.

9:30 a.m.: Haley gives her initial findings on Pinto to Strauss who five minutes later is doing her own exam on the cat. Pinto’s eye has some inflammation and its source is unknown.

9:50 a.m.: Strauss presents her exam findings to Ben-Shlomo before the clinician goes in to see Pinto. During his exam, Ben-Shlomo asks Haley questions about what they are seeing before talking to the client about the case.

Ben-Shlomo tells the client he has no definitive answer to what is causing the inflammation. He goes over her options before she decides to use eye drops and come back for a recheck in three to four weeks. 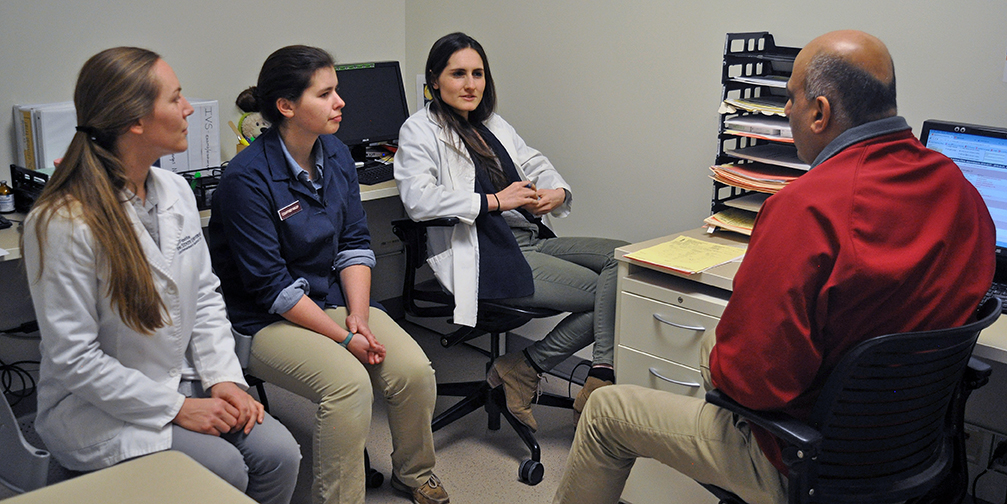 10:25 a.m.: As Pinto is discharged, Ben-Shlomo checks up on ChaCha. The cat’s eye problems developed just over a year ago but today it appears progress is being made.

“It looks like ChaCha has had a breakthrough this week,” Thill said after listening in on Ben-Shlomo’s evaluation. “She’s been on steroids and natural supplements and there has been improvement.”

10:30 a.m.: The first dog of the day is brought into the exam rooms. Capone is a bulldog in for a recheck. 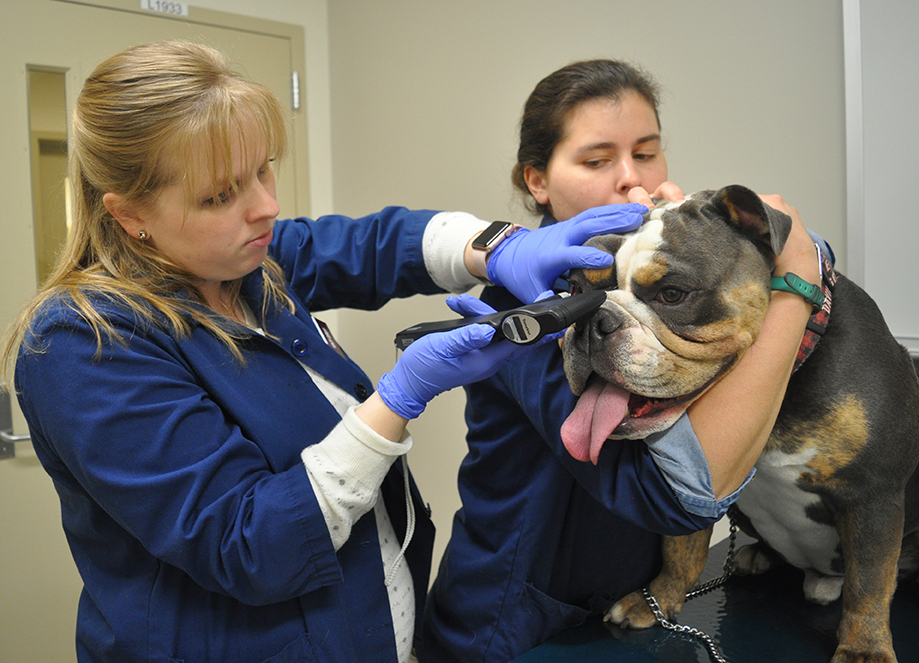 10:50 a.m.: Activity all around as fourth-year student Jordan Moline and Foote continue Poocini’s exam. Fourth-year student Kaiti Grief is working with Capone and Thill is entering the medical records for ChaCha.

In the meantime, fourth-year student Brad Christensen is preparing an exam room for the 11 a.m. appointment for Maddie, a black Labrador.

11 a.m.: Maddie arrives in exam room 17. Her owner reports that despite losing her sight, the dog gets around well throughout the house and has gained 10 pounds since her last appointment. Christensen goes over the dog’s medications and other history since she last visited ophthalmology.

11:20 a.m.: Capone is released and Haley, Thill and Grief are in the rounds room, grabbing a quick lunch and typing in the medical records of the cases they have seen this morning. Christensen and Moline continue to work with their patients.

11:40 a.m.: After visiting with Ben-Shlomo, Poochini is discharged and Moline brings in the prescriptions and goes over instructions with the client. He walks the client and patient to the door and schedules a recheck in a week for the cat. 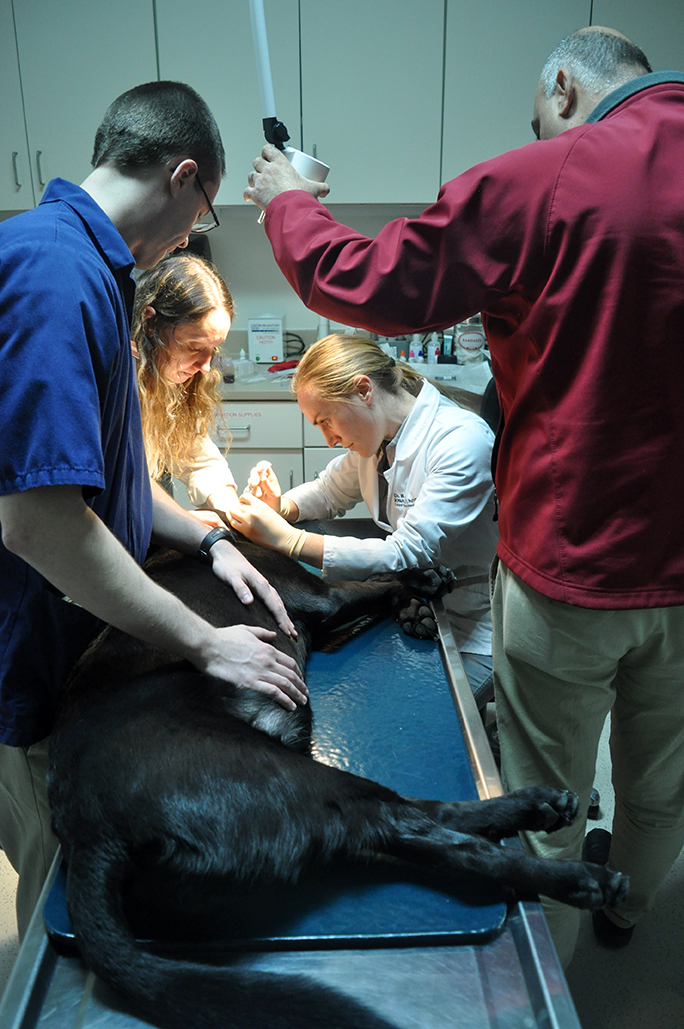 11:45 a.m.: Maddie, the final patient of the morning, is still in the exam room. And she’ll be there for a while. Suffering from a fungal infection, a common occurrence in Iowa, she will receive an anti-inflammatory injection in the back of her right eye in the early afternoon.

Previously she had injections in both eyes, but the left eye has seen some improvement and the owner and veterinarians decide to continue the treatment in the right eye with the hope additional improvement will be seen.

Noon: While the residents and Ben-Shlomo have a scheduled weekly meeting, the fourth-year students finish lunch and continue to work on medical records while preparing for the afternoon’s five new patients.

With Maddie staying for a round of treatments, Christensen switches appointments with Haley for his 1 p.m. with Sadie, an eight-year-old pug.

12:40 p.m.: Christensen brings Maddie into Ocular Imaging where a few minutes later she is administered treatment in her right eye.

1 p.m.: ERG and Ocular Imaging are right next to each other. Ben-Shlomo leads a contingent of third-year students into Ocular Imaging to observe Maddie’s procedure on her right eye. As soon as Foote completes the procedure, Ben-Shlomo is off to ERG to learn more about Sadie.

1:30 p.m.: While most of the ophthalmology team is working elsewhere, Moline starts a consult on Cayley, a cat who was already in ICU. The scheduled 1:30 p.m. appointment is cancelled, allowing for a little breathing room before the next round of clients roll in.

2 p.m.: Cayley, the ICU cat, is still in one of the exam rooms and the latest patient, Bill, an older dog, is soon admitted to another exam room for a recheck appointment. 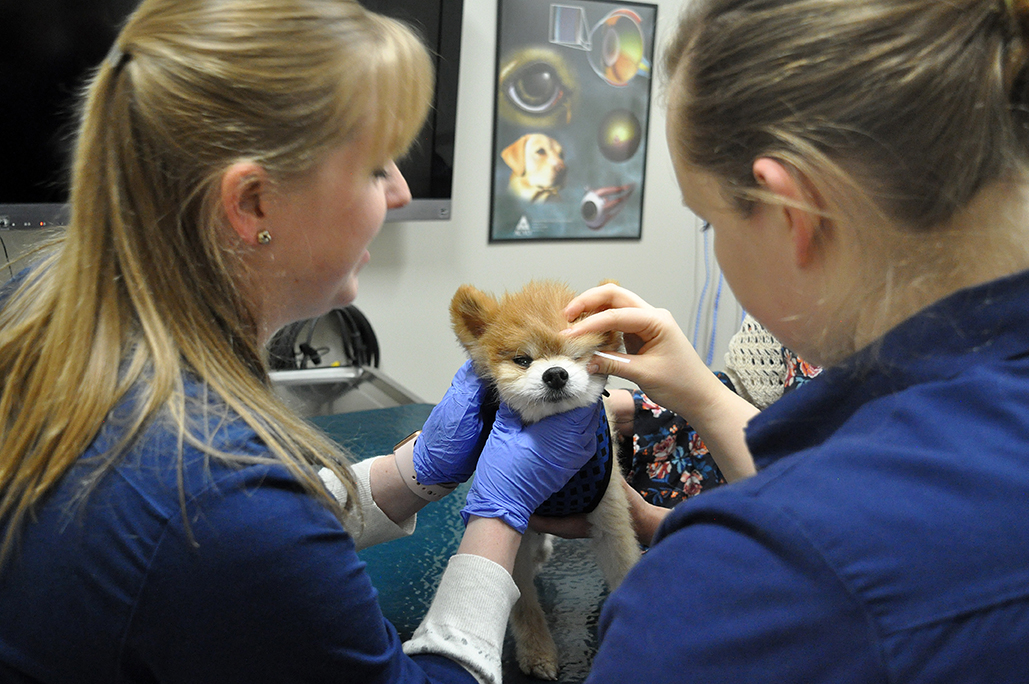 2:15 p.m.: Maddie has woken up from her sedation and is back in your cage to further recover before she is released to her owner. The tests on Sadie were completed and Ben-Shlomo begins examining Cayley.

2:30 p.m.: The next-to-last appointment of the day walks in as Cocoa the dog is examined by Haley. The consult is completed on Cayley and she is sent back to ICU for further tests.

2:45 p.m.: Maddie’s day at the Hixson-Lied Small Animal Hospital is complete and she’s released to her owner with an appointment for a recheck in three weeks.

3 p.m.: Cocoa is examined by Ben-Shlomo and after recheck information is given to the owners, the third-year students depart for the day.

3:15 p.m.: The intercom announces the day’s final patient, a dog named Hazel while Bill is given a new antibiotic for treatment of his left eye.

3:30 p.m.: Hazel is treated by Moline and 30 minutes later the final patient has been cleared from the schedule.

5 p.m.: The five students on the ophthalmology rotation have completed their day by calling the clients for Thursday’s appointments. 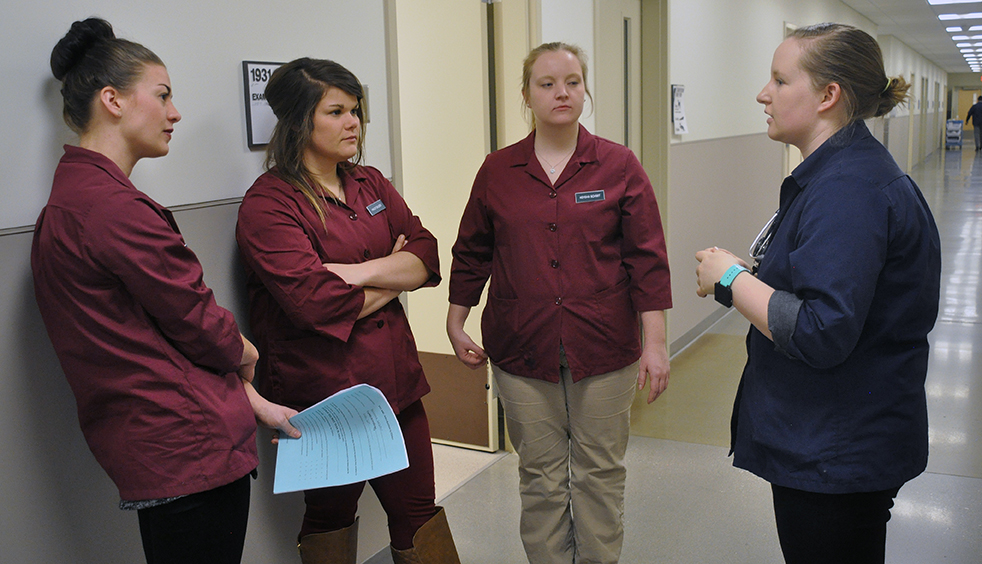 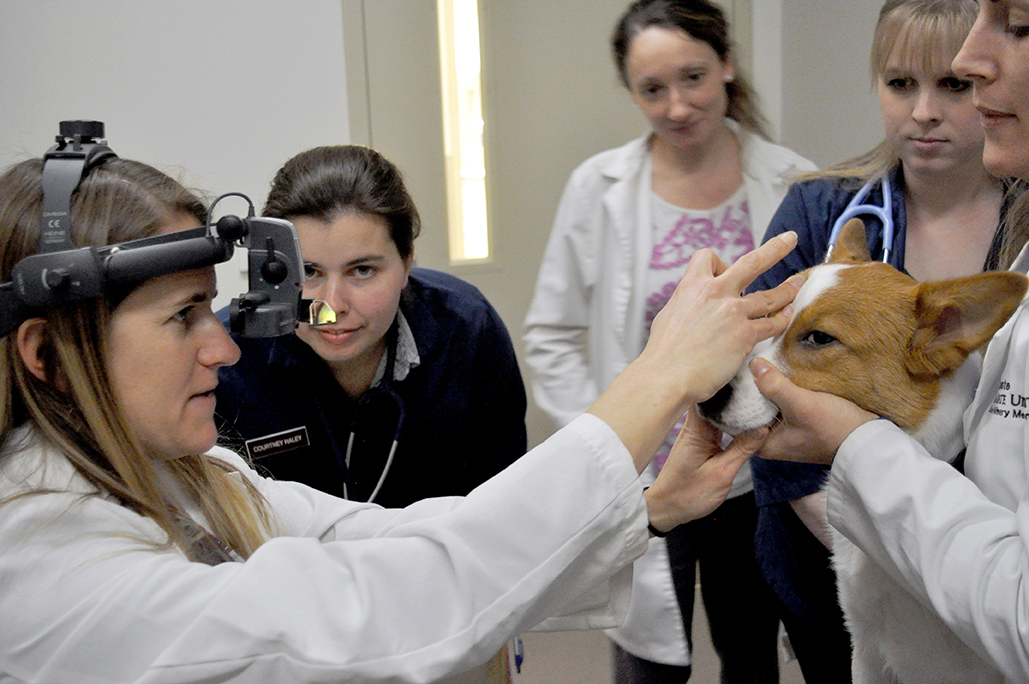 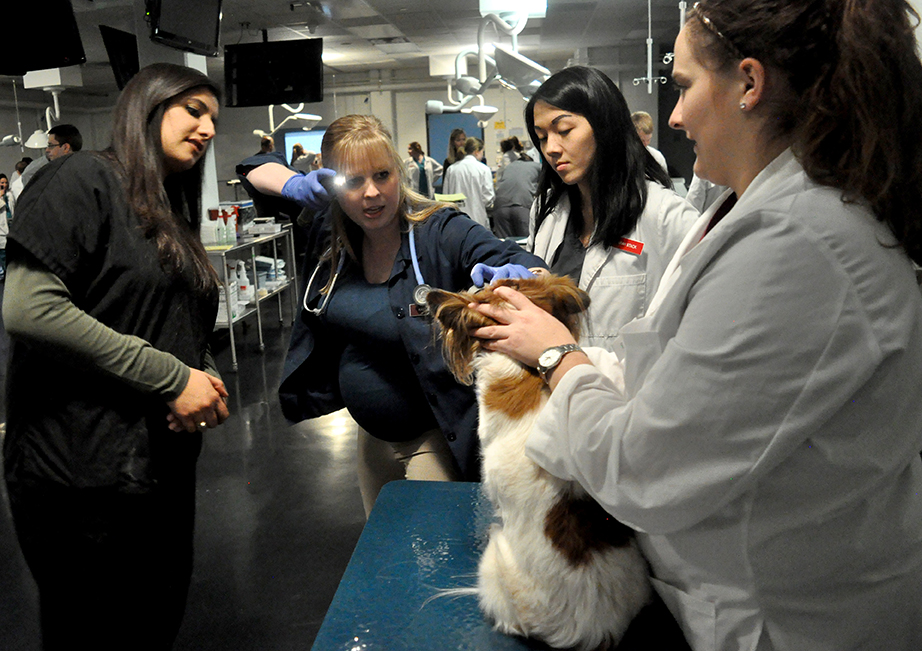 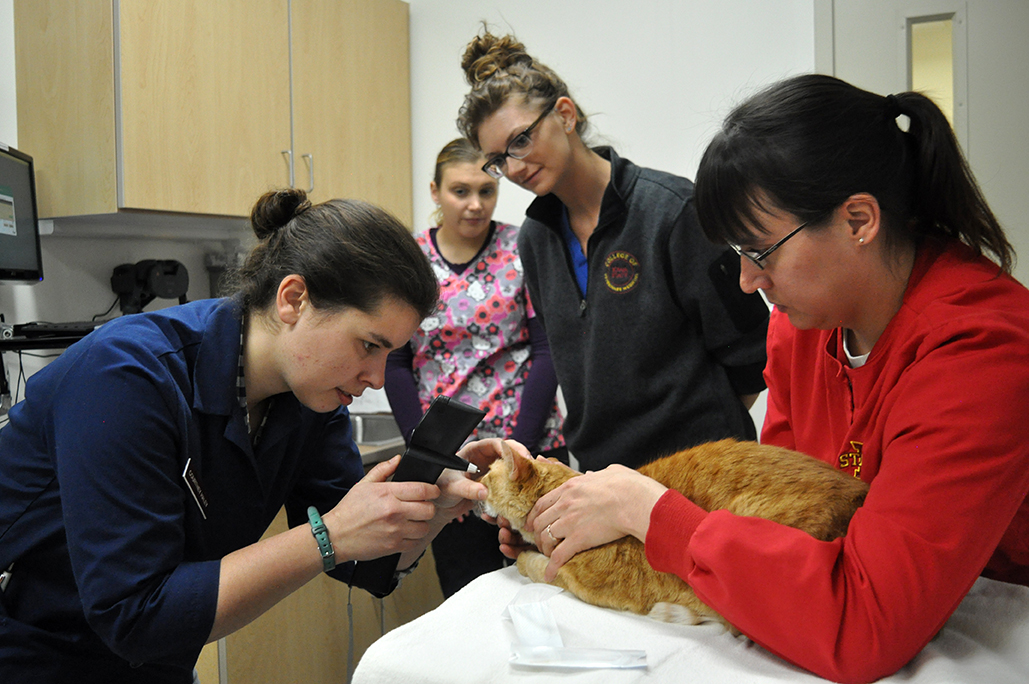 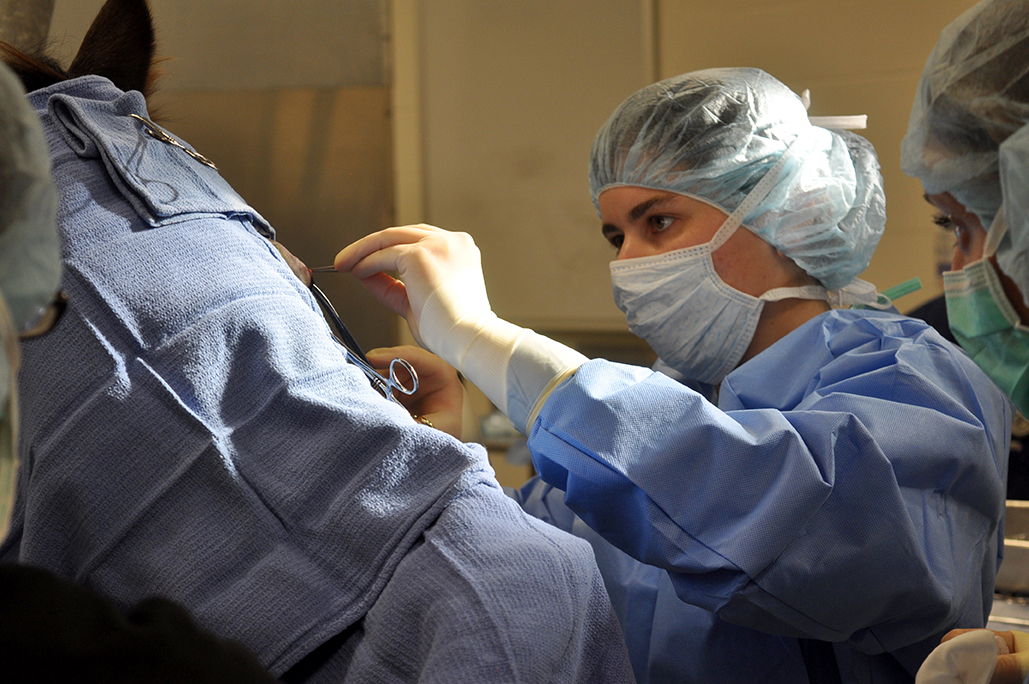 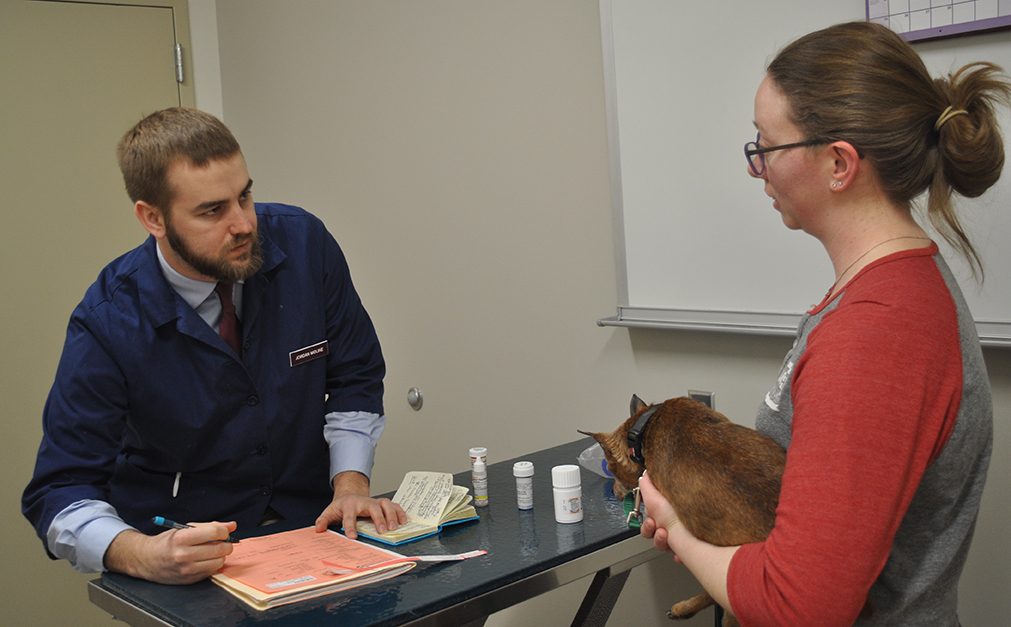 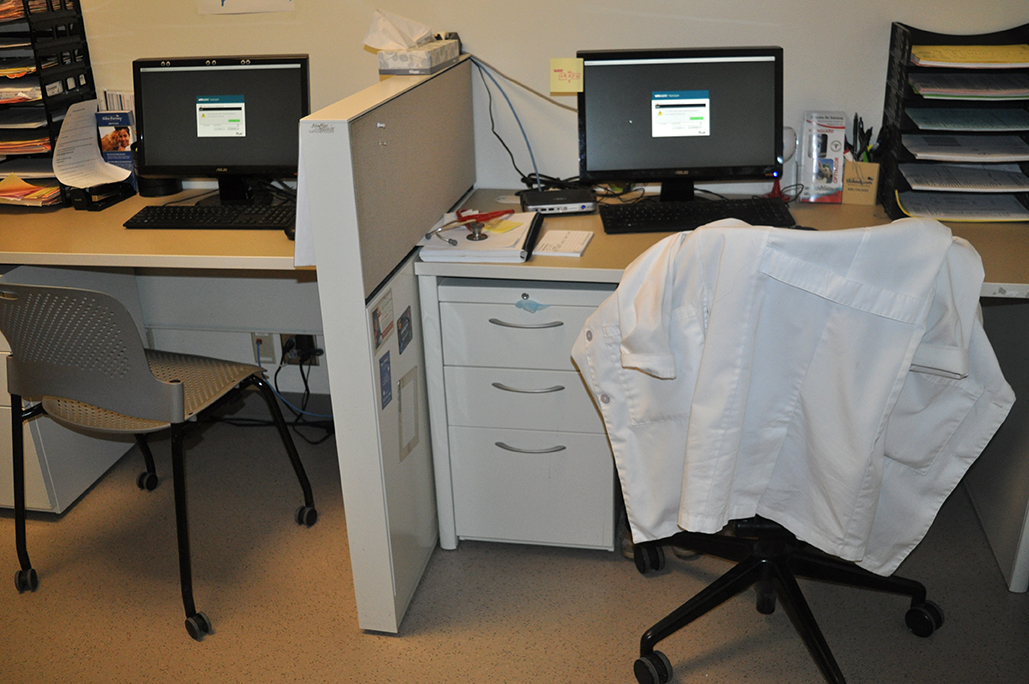 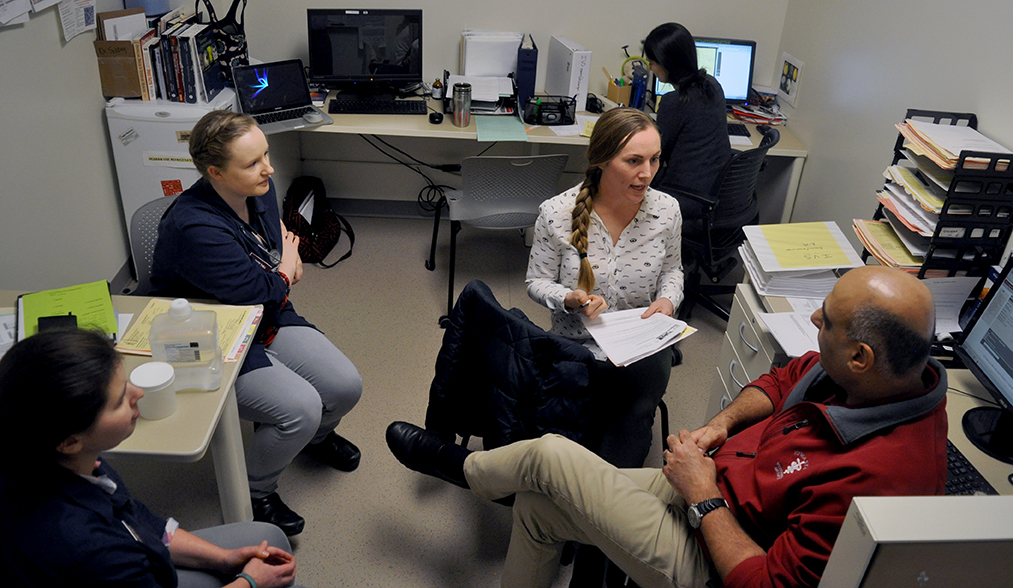 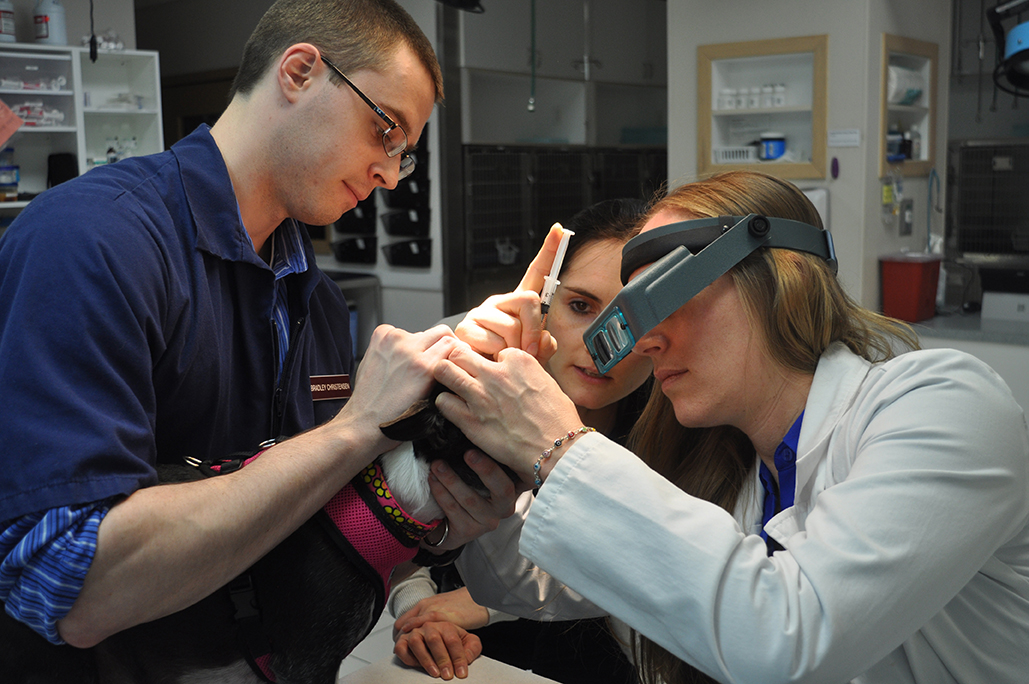 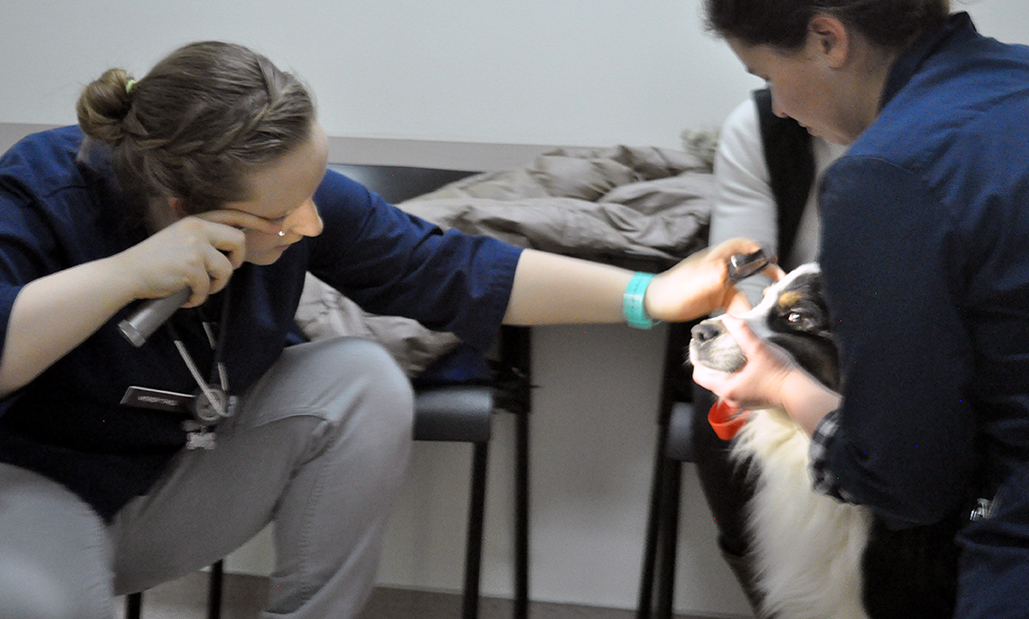 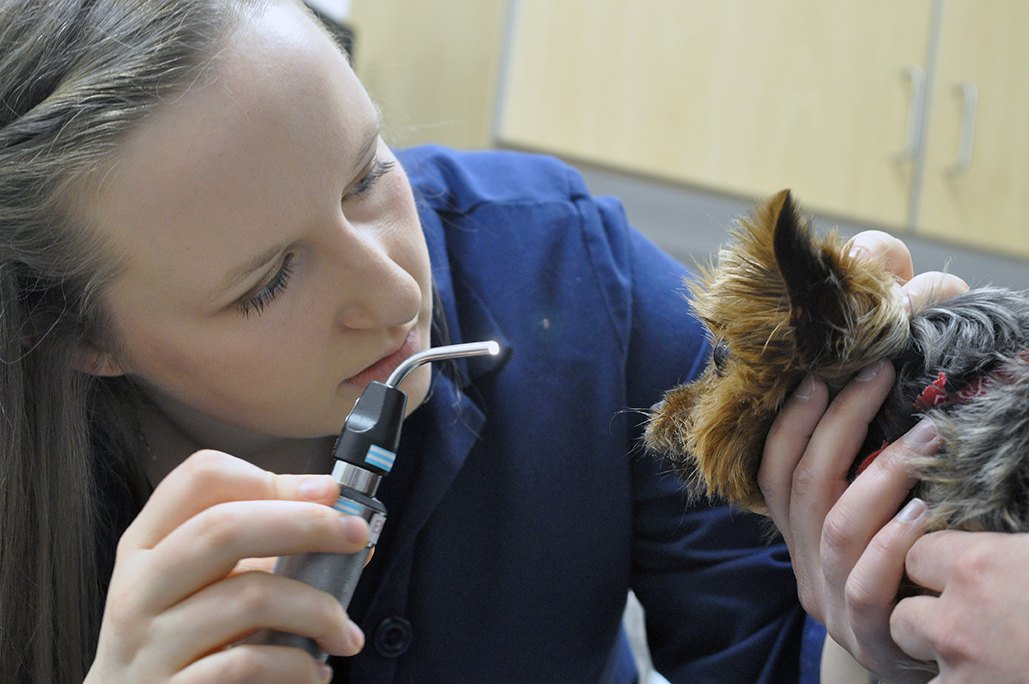 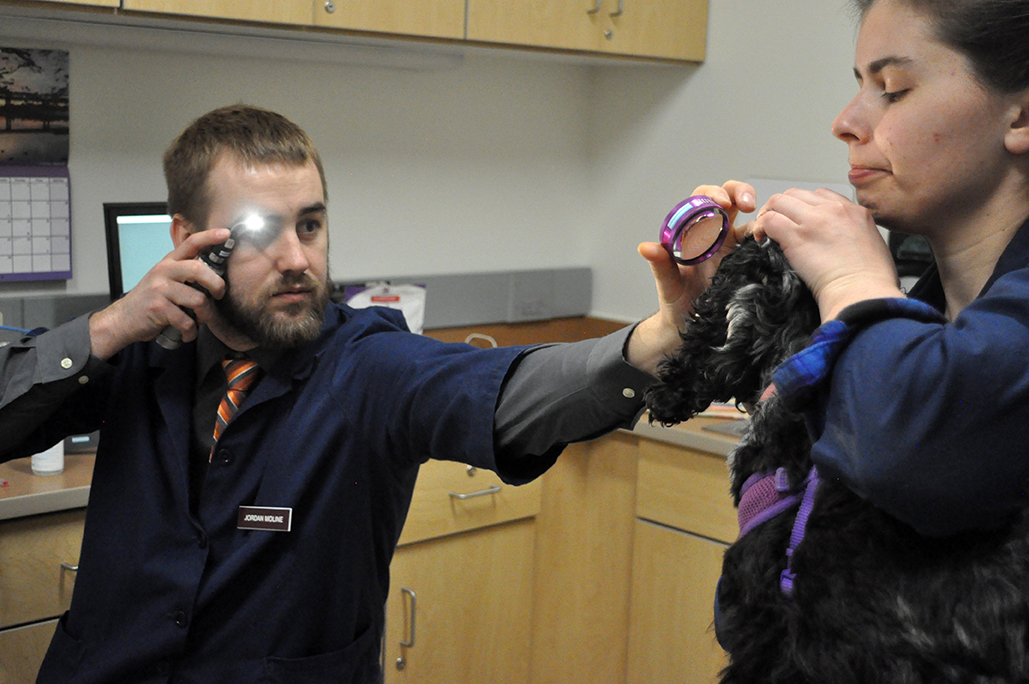